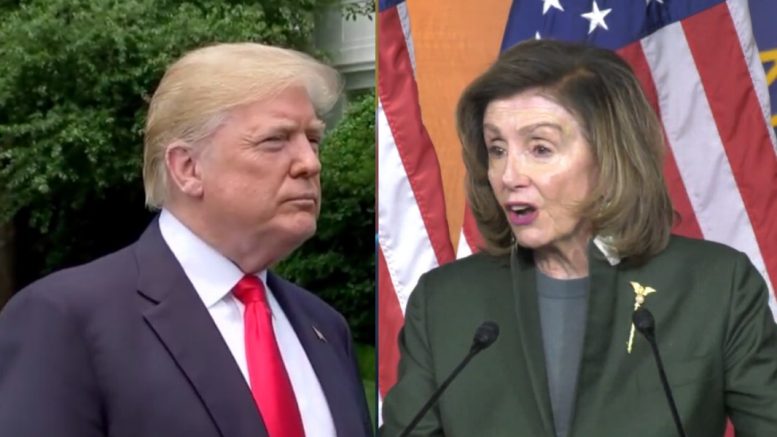 45th President Donald J. Trump issued an email statement on Thursday morning from his “Save America” PAC wondering why the Democrat-led January 6 Committee is not investigating the “massive fraud and irregularities”, which he insists took place in the 2020 Presidential Election.

He also questioned why House Speaker Nancy Pelosi (D-CA) and “her files” are not being investigated “for not properly securing the Capitol with Soldiers or the National Guard”, despite the 45th President’s request to do so.

Why isn’t the corrupt Unselect Committee of political hacks and highly partisan sleazebags in Washington investigating the massive voter fraud and irregularities that took place in the 2020 Presidential Election, rather than spending all of its time investigating those who were protesting its result? It was the Crime of the Century! Large-scale proof of fraud and serious irregularities exist all over the place.

Also, why is Crazy Nancy Pelosi and her files, which reportedly have been largely destroyed and deleted, not under investigation for not properly securing the Capitol with Soldiers or the National Guard that were strongly recommended to her by me and others?

I knew the crowd would be extraordinarily large because they were protesting the RIGGED ELECTION. Capitol security was her job, not the President’s, and the American people now know that. If she did with security what she should have, there would have been no “January 6” as we know it.

The Fake Unselect Committee wants nothing to do with that subject because they know it was the fault of Nancy Pelosi and, to a lesser extent, the Mayor of D.C. So, if I recommend Soldiers and if she refused to use them, why am I, and those around me, responsible for anything? We’re not, plain and simple! Continued Below

In a second email statement on Thursday, Trump was curious to know why the January 6 Committee is not investigating the “massive ballot harvesting operation”, which reportedly took place in Georgia and other states.

“Why isn’t the Unselect Committee investigating the massive ballot harvesting operation that has just been irrefutably reported, on tape, in Georgia and other Swing States? Game changer, among many other game changers!” he said.

Most recently, Georgia authorities launched an investigation into an allegation of systematic ballot harvesting during the state’s 2020 general election and subsequent U.S. Senate runoff and may soon issue subpoenas to secure evidence, according to a report from John Solomon at Just The News. Continued Below

Meanwhile, on Thursday, Pelosi was asked if she has provided testimony or documents to the Jan. 6 committee. Appearing nervous, she claimed that she stays away from Committee.

.@SpeakerPelosi on if she's provided testimony or documents to @January6thCmte: "No. I keep as far away from the committee as possible. If they ask me, I would. I was on the podium and then I was swept away." pic.twitter.com/NVDEgMXoC1

Congress, via the police department, is arguing that the videos and emails being sought are not matters of public record and that there is no public interest in their release. Furthermore, the body is claiming that sovereign immunity prevents citizens from suing for their release, Just The News reported.

“Why isn’t the corrupt Unselect Committee of political hacks and highly partisan sleazebags in Washington investigating the massive voter fraud and irregularities that took place in the 2020 Presidential Election, rather than spending all of… pic.twitter.com/0P7rmVulFL

“Why isn’t the Unselect Committee investigating the massive ballot harvesting operation that has just been irrefutably reported, on tape, in Georgia and other Swing States? Game changer, among many other game changers!” pic.twitter.com/z2UoNJTNU5

Trump Sets The Record Straight On COVID-19 With A Video, Jon Karl Reacts: “Why Did You Feel The Need To Do That?”