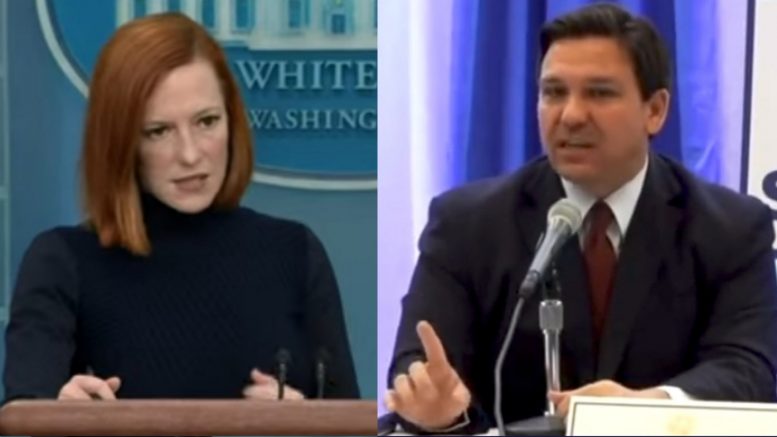 Florida Governor Ron DeSantis slammed White House Press Secretary Jen Psaki over what he considers to be “lies” told to the American public related to the coronavirus pandemic.

The Florida governor specifically focused on remarks Psaki apparently said about DeSantis’ leadership in regards to getting schools opened back up while then going on to claim that monoclonal antibodies do not work to treat the omicron strain of the coronavirus.

DeSantis stated as follows during a recent press conference:

The White House press secretary stands in front of that podium and lies through her teeth every single day and usually about the state of Florida.

The other day she said Florida doesn’t do enough to get schools open. Are you kidding me?! I remember them criticizing me when we did this two years ago. We were the only big stste to have every school district open for in person. And we did that way before Biden was even president. We didn’t need the Biden stimulus money for that. We did it. We opened them, and yet they’re saying Florida didn’t do it.

Recently, she said [monoclonal antibodies] do not work — definitively do not work against omicron and they have really bad side effects. That’s what she said and that is not true based on what we’ve seen in the state of Florida.

But the idea that this has lead [to] like massive adverse reactions is just a lie, and it is a lie designed to buttress, politically, a position they have taken, which is just indefensible as a matter of policy, as a matter of basic decency for people. And so, yes, I understand up there, their whole rationale when they do those pressers [is to] prop up their regime. I get it. But you can only lie so much. And you know what? People don’t believe the lies because they understand how ridiculous it is. Video Below

.@RonDeSantisFL says The White House @PressSec stands in front of the podium and lies through her teeth. pic.twitter.com/DMKlQyXe7T

Trump Responds To Criticism Of Using The Phrase ‘Chinese Virus’: “Saying That Our Military Gave It To Them Creates A Stigma”

‘HE FLIPS, HE FLOPS’: Dr. Fauci Gets Scorched in New DeSantis Ad