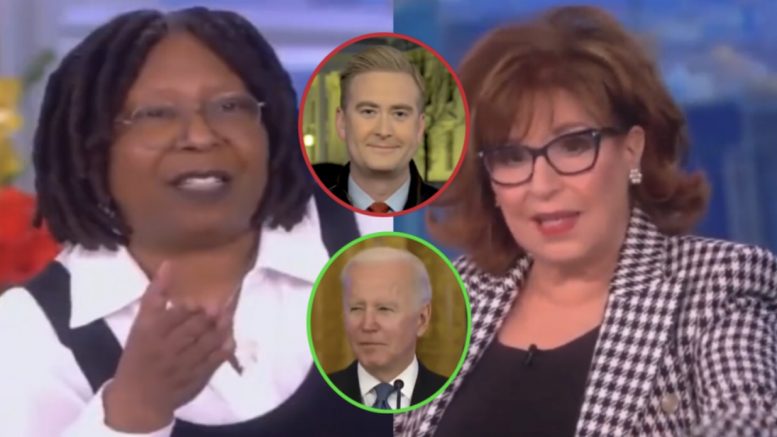 During Tuesday’s airing of ABC’s “The View”, Whoopi Goldberg and Joy Behar defended 79-year-old Joe Biden after he called Fox News White House correspondent Peter Doocy a “stupid son of a b*tch” on Monday — when he had attempted to ask him a question over inflation.

“Will you take questions on inflation then? Do you think inflation will be a political liability for the midterms?” Doocy asked, which Biden in turn, responded, “It’s a great asset — more inflation. What a stupid son of a b*tch”.

“No, I don’t think he should apologize,” Whoopi Goldberg said, before Joy Behar pulled out a note card — seemingly deflecting — to read off previous remarks 45th President Donald Trump said to reporters.

“I’m sorry, but no. He should acknowledge he’s human, because that happens sometimes when people ask you endless stupid questions from one particular place,” Goldberg opined, likely referring to Fox News. “And sometimes, you just lose it for a second.”

“The difference is, he said, ‘Okay, lemme call him and apologize’, because that happens. I think, that for me, is the representation of what a human being, as president, should be,” she said, after Biden  called Doocy’s cell phone within an hour after the exchange on Monday and told the Fox News correspondent, “It’s nothing personal, pal”.

Behar chimed in, again comparing Biden to Trump. “It points out the difference between Biden and Trump. Because Trump, let us not forget said, ‘The press is the enemy of the people’. … Okay, so [Biden] say’s, ‘Stupid S.O.B.’ It’s nothing compared to what Trump said or did,” she alleged.

CNN’s Lisa Ling interjected, however, insisting, “I agree, but we can’t keep comparing him to Trump”, which Behar shot back, saying, “Yes you can”.

“And really, it’s not like Doocy — I mean, there’s stupid questions, but he was asking about inflation, which is a really issue and the midterm elections, which are right around the corner,” Ling then explained.

Goldberg alleged Doocy “is smart enough to know” not to ask the question he did, adding, “He got what he wanted. He asked a question that wasn’t worthy of him asking it.”

Related: Judge Jeanine Fires Back At Joy Behar: “Instead Of Sitting On Your Butt With Your Friends, Pontificating… Do Something That Matters”