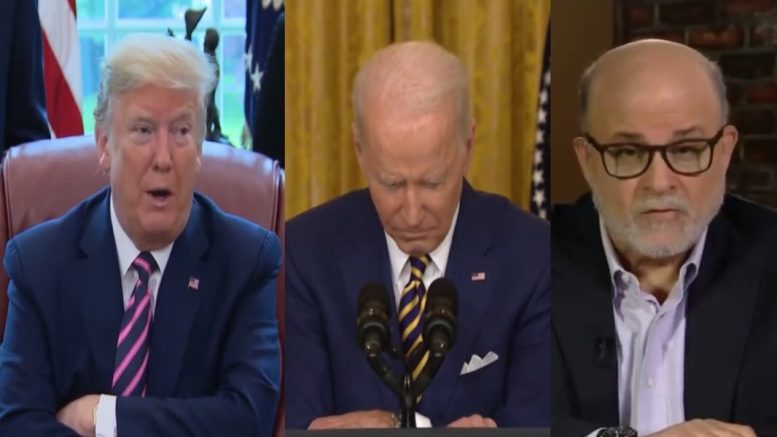 45th President Donald J. Trump, during an interview on the Mark Levin Show Wednesday, reacted to Joe Biden’s second solo new conference amid one year into his alleged presidency.

Trump told Levin “we had a much different country a year ago” after detailing failures from the Biden administration in its first year, adding that Biden has had “tremendous progress in destroying our country”.

Joe Biden had claimed on Wednesday, however, “I didn’t overpromise … I have probably outperformed what anybody thought would happen”, amid rising inflation, a surge in the highly-transmissible omicron variant of COVID-19, the Afghanistan debacle, rising crime, border chaos, and a stalled agenda in Congress.

“You look at the border with people coming in, you look at inflation, no more energy independence. We have a much different country than we had a year ago,” Mr. Trump said.

The 45th President also pointed out that during Biden’s press conference, the reporters were “friendly” towards the 79-year-old career politician, adding, they were “making positive statements and then sit down”.

“I haven’t seen one hostile question. … Not even hostile, just one fair question. And it’s an interesting thing. It’s phenomenal, because I haven’t seen this happen, except with him,” Trump said. “But, he’ll look down. He’ll get a name, then he’ll read off the name. … And that reporter, he or she will ask a question, then he’ll look down again and read from his notes and give the answer. I never had that lovely option. … I don’t want that option, to be honest with you. I wouldn’t want it, but it’s a very weird thing.” Continued Below

On Wednesday, Trump also issued an email statement in the middle of Biden’s news conference over the matter, wondering why Biden “picks a reporter off a list” and then “reads the answer?”

“How come Biden picks a reporter off a list, in all cases softball questions, and then reads the answer?” he asked.

“I would never have been allowed to get away with that, nor would I have to!” Trump added. Continued Below

Trump on Biden using notes during his news conference:

“The reporters are the most friendly group of reporters I’ve ever seen. They don’t even ask questions, they make positive statements and then sit down.” pic.twitter.com/KCbc8UV4vf

(Related: Trump Reacts After Biden Is Seen With ‘Flashcard Of Anti-Trump Talking Points’ During Press Conference In England)