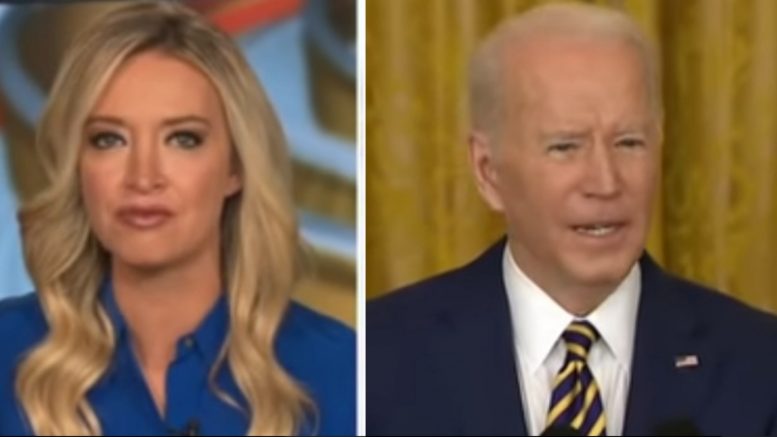 “I thought that was the most delusional press conference I have ever seen,” Fox News contribitor Kayleigh McEnany said in reaction to Joe Biden’s second solo press conference since taking office.

Appearing on Thursday’s airing of Outnumbered, the former White House press secretary exposed the “toxic formula” that appeared to exist involving a president who “does not have a basic grasp on the facts” and a press corps “that just isn’t interested in basic follow-ups.”

It was delusional and… it was also the first time the President of the United States, or really Biden ever in a two-hour solo format… and I left that press conference genuinely scared for the future of our country.

This is someone who is deeply delusional, someone who clearly does not know how to lead. He does not have a basic grasp on the facts. He continued to peddle mistruth after mistruth, emboldening Putin, emboldening Xi and China. And this is only one year! We’ve only had one year of President Biden and look and the crisis and the fires across the country that he entirely ignored.

We have three more years left of this guy. I left very disturbed and even more disturbed by the reporters. But I can tell you if President Trump said half of what President Biden had said yesterday, reporters would have been screaming. They would have had a follow up. They would have spoken over President Trump as he was speaking… They didn’t do that yesterday. So it’s a toxic formula when you have a delusional president and a press corps that is just uninterested in basic follow-ups.

Biden Tells Anderson Cooper He’s Been to the Southern Border ‘Before’, Instantly Gets Fact-Checked