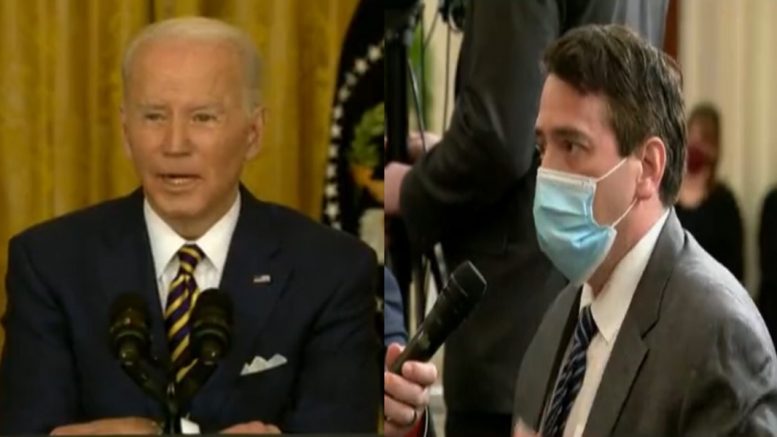 “I’d like to raise a delicate subject, but with utmost respect for your life accomplishments and the high office you hold,” Rosen humbly said.

“A poll released this morning by Politico Morning Consult found 49% of registered voters disagreeing with the statement ‘Joe Biden is mentally fit'”, Biden smiled and scoffed at the statement as the Newsmax chief White House correspondent continued.

“Not even a majority of Democrats, who responded, strongly affirmed that statement,” Rosen told Biden.

“I’ll let you all make the judgment whether they’re correct,” Biden, who turned 79 in November, said.

Rosen pressed on with the question: “Well, so the question I have for you, sir, if you’d let me finish, is why do you suppose such large segments of the American electorate have come to harbor such profound concerns about your cognitive fitness?” Continued Below

Joe Biden responded, “I have no idea.”

The Politico/Morning Consult poll released on Wednesday reports that 49% of voters disagree with the statement that the president is “mentally fit.” Only 43% of Democrats say they “strongly agree” with the statement. A majority, 68%, of Republicans strongly disagree.

The poll also found that 51% of registered disagreed with the statement that Biden is capable of leading the country, with 40% of those strongly disagreeing. Video Below

In December, Jill Biden rejected the idea that her husband’s cognitive functions are declining, saying that the question is “ridiculous.”

UPDATE: @JoeBiden's mental fitness for office is "the elephant in the room of American political discourse," @JamesRosenTV says, and that's why he proposed the question to the president he did.

"I thought he might want a chance to address it." pic.twitter.com/KLHDNK4ljR