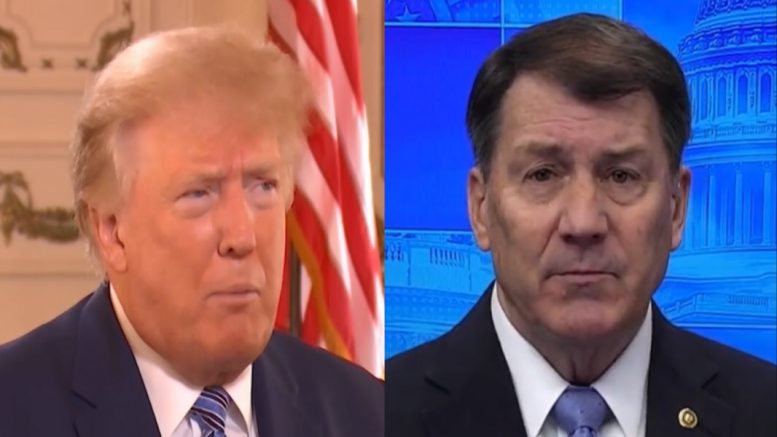 45th President Donald J. Trump issued a lengthy email statement on Monday from his “Save America” PAC slamming Senator Mike Rounds (R-SD) as a “a weak and ineffective leader who “will never receive my Endorsement again!”

Trump’s statement came after Senator Rounds appeared on ABC’s “This Week” over the weekend, claiming he does not believe the 2020 election was stolen from Trump. “The election was fair, as fair as we have seen,” he alleged.

Sen. Mike Rounds (R-SD): "The election was fair … We simply did not win the election as Republicans for the presidency." pic.twitter.com/ocFMslElFu

“’Senator’ Mike Rounds of the Great State of South Dakota just went woke on the Fraudulent Presidential Election of 2020. He made a statement this weekend on ABC Fake News, that despite massive evidence to the contrary, including much of it pouring in from Wisconsin, Georgia, Arizona, Michigan, Pennsylvania, and other states, he found the election to be ok—just fine. Is he crazy or just stupid?” Trump asked in email statement on Monday.

“The numbers are conclusive, and the fraudulent and irregular votes are massive. The only reason he did this is because he got my endorsement and easily won his state in 2020, so now he thinks he has time, and those are the only ones, the weak, who will break away. Even though his election will not be coming up for 5 years, I will never endorse this jerk again,” the 45th President expressed.

“It’s RINOs like this that are allowing the Democrats to destroy our Nation! Our Borders, our Military, our Economy, Inflation, the horrible handling of the China Virus and Afghanistan, and rampant crime throughout our Democrat-run cities are ripping our Country apart. We are a laughingstock throughout the world when we were respected and even feared just 1 year ago. There were no thoughts of Russia with Ukraine, China with Taiwan, Iran with nuclear weapons, or North Korea with nasty statements,” he said. Continued Below

The Radical Left Democrats and RINOS, like ‘Senator’ Mike Rounds, do not make it easy for our Country to succeed. He is a weak and ineffective leader, and I hereby firmly pledge that he will never receive my Endorsement again!” 45th President Trump added.

Mr. Rounds also said on Sunday that while he previously stated he would support the next Republican presidential nominee, he would take a “hard look” at supporting 45thPresident Trump if he ran again in 2024.

“I’m going to support the Republican nominee to be president. I'm not sure that the eventual nominee has even shown up yet,” GOP @SenatorRounds tells @GStephanopoulos when asked if he could support former Pres. Trump running again in 2024. https://t.co/PNEiELVSGZ pic.twitter.com/uadNsiH6LO

““Senator” Mike Rounds of the Great State of South Dakota just went woke on the Fraudulent Presidential Election of 2020. He made a statement this weekend on ABC Fake News, that despite massive evidence to the contrary, including much of it… pic.twitter.com/VXFglmh4gX