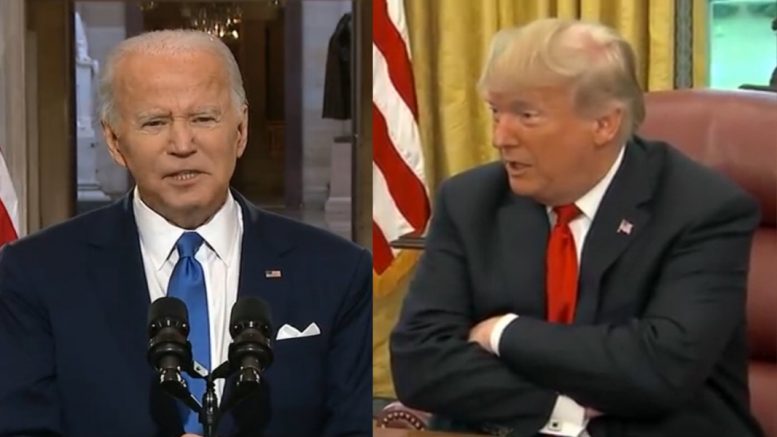 45th President Donald J. Trump issued a lengthy email statement on Friday, calling 79-year-old Joe Biden “the voice of desperation and despair” after the Democrat career politician spoke on Thursday about the January 6 Capitol protest, in a seemingly divisive pre-written speech, from Statuary Hall in the U.S. Capitol.

Trump, in his statement, suspected Biden’s “handlers gave him that speech to read yesterday” because “they know the unprecedented failures of his presidency and the left-wing extremism of the Pelosi-Schumer Congress have destroyed the Democrat Party.”

What we witnessed yesterday was the last gasps of a corrupt and discredited left-wing political and media establishment that has, for decades, driven our country into the ground—shipping away our jobs, surrendering our strength, sacrificing our sovereignty, attacking our history and values, and trying to turn America into a country that our people can barely recognize.

These radical leftists in Washington care NOTHING for American Democracy. All they care about is control over you, and wealth and riches for themselves. But they are failing. No one believes them anymore. And the day is quicky [sic] coming when they will be overwhelmingly voted out of power.

Joe Biden’s voice is now the voice of desperation and despair.

His handlers gave him that speech to read yesterday because they know the unprecedented failures of his presidency and the left-wing extremism of the Pelosi-Schumer Congress have destroyed the Democrat Party. Continued Below

Part of their panic is motivated by the realization that, just like the Russia Collusion Hoax, they cannot sustain the preposterous fabrications about January 6 much longer. The truth is coming out.

But for them, the worst part of it all is the knowledge that the American People are seeing right through their phony media event—which despicably compared a Pelosi-led security failure at the Capitol to the darkest days in American history and the deaths of 3,000 Americans.

The people see right through that sham. They see a cynical politician who ran for office promising unity who is now doing the most divisive thing possible—slandering his political opponents as domestic terrorists, just like insecure dictators do in communist countries. Continued Below

The American People also see that January 6 has become the Democrats’ excuse and pretext for the most chilling assault on the civil liberties of American citizens in generations.

It is being used to justify outrageous attacks on free speech, widespread censorship, de-platforming, calls for increased domestic surveillance, appalling abuse of political prisoners, labeling opponents of COVID lockdowns and mandates as national security threats, and even ordering the FBI to target parents who object to the radical indoctrination of their children in school.

And this week, January 6 is also the Democrats’ excuse for trying to pass a radical Federal takeover of state election law. They are trying to BAN voter ID and other basic measures that can ensure the sacred integrity of the vote. The reason the Democrats are doing all of this is not because they believe they will win a fair and honest election. It’s because they know they will overwhelmingly LOSE one.

Today, I am more confident than ever in the strength and common sense of the American People. They are counting the days until we will no longer have to be constantly lectured, lied to, and dictated to by corrupt politicians and their media partners. When we will no longer have to put up with this broken establishment’s hoaxes and its manufactured media narratives—And as Biden and his radical handlers know, that day is coming fast. Continued Below

Because in the months and years ahead, the American People are going to speak up, take action, and VOTE in massive numbers, and we are going to TAKE BACK OUR COUNTRY.

From the very beginning, all that Americans have wanted is great jobs, safe neighborhoods, strong borders, good schools, a proud nation, and a government that LISTENS to the American People. That is what our movement has always been about—and that is what we are focused on to this day.

Joe Biden and the Radical Democrats have failed on every front. But do not lose hope. America WILL be Great Again.

“What we witnessed yesterday was the last gasps of a corrupt and discredited left-wing political and media establishment that has, for decades, driven our country into the ground…” pic.twitter.com/QPgljecvR3

Related: Trump Fires Back After Biden’s Jan. 6 Speech: “This Political Theater Is All Just A Distraction For The Fact Biden Has Completely & Totally Failed”

Doocy Confronts Jean-Pierre Over her ‘Stolen Election’ Tweets: ‘If Denying Election Results is Extreme Now, Why Wasn’t it Then?’