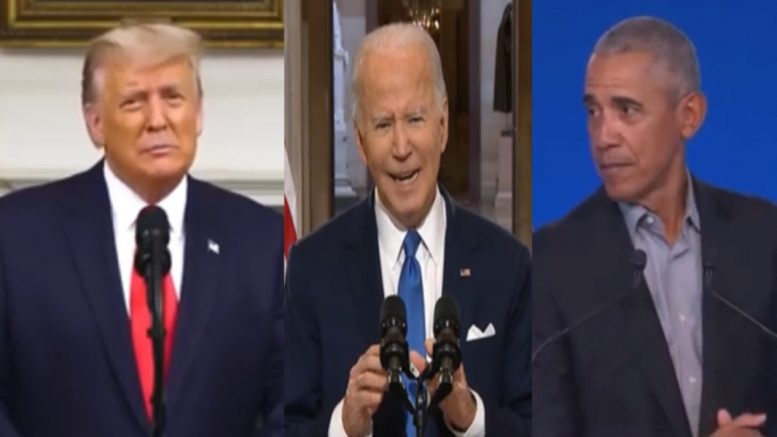 Trump’s statement came after the Democrat career politician and former Democrat California Senator Kamala Harris spoke about the January 6 Capitol protest in a seemingly divisive pre-written speech from Statuary Hall in the U.S. Capitol. Biden referred to the “former president” 16 times in his remarks, as previously reported by The Freedom Times.

“To watch Biden speaking is very hurtful to many people. They’re the ones who tried to stop the peaceful transfer with a rigged election. Just look at the numbers,” the 45th President urged.

“Does anybody really think that Biden beat Obama with the Black population in select Swing State cities, but nowhere else? That he would lose 18 out of 19 bellwether counties, and 27 out of 27 ‘toss up’ House races, but somehow miraculously receive the most votes in American history with no coattails? That he would lose Florida, Ohio, and Iowa and win, even though it has never been done before?” Trump asked.

“They spread a ‘web of lies’ about me and Russia for 4 years to try to overturn the 2016 election, and now they lie about how they interfered in the 2020 Election, too. Big Tech was used illegally,” 45th President Trump said, referring to the Mueller hoax.

“Where did all those votes show up from in Georgia, where it was just revealed they sold ballots for $10 a piece, or in Pennsylvania, and Arizona, and Wisconsin,” Trump wondered, referencing a new report from John Solomon at Just The News, revealing that Georgia authorities have launched an investigation into an allegation of systematic ballot harvesting during the state’s 2020 general election and subsequent U.S. Senate runoff and may soon issue subpoenas to secure evidence. Continued Below

“He acts like he’s aggrieved, but we’re the ones who were aggrieved and America is suffering because of it with poisonous Borders, record Inflation, a humiliating surrender in Afghanistan, $5 a gallon gas and higher, empty stock shelves, and rampant crime,” Trump said of Biden.

“America is a laughingstock stock of the world, and it’s all because of the real insurrection, which took place on November 3rd, but this is an election year and MAGA Republicans should get elected and work with me to fix this horror that Joe Biden and the Democrats have brought us,” he suggested.

“Never forget the crime of the 2020 Presidential Election. Never give up!” the 45th President insisted. Continued Below

“…Never forget the crime of the 2020 Presidential Election. Never give up!” pic.twitter.com/9lSRndnW9V

"Biden is working hard to try and deflect the incompetent job he is doing, and has done, on the horrible Afghanistan withdrawal (surrender), the Borders, COVID, Inflation, loss of Energy Independence, and much more. Everything he touches turns… pic.twitter.com/rFavehYIYZ

"Due to inept leadership that gave us open borders, COVID incompetence, loss of energy independence, a military in chaos, rampant inflation, corrupt elections, and lack of world standing, our Nation, perhaps for the first time, has lost its confidence!" pic.twitter.com/49feVqzTzN

Related: Trump Fires Back After Biden’s Jan. 6 Speech: “This Political Theater Is All Just A Distraction For The Fact Biden Has Completely & Totally Failed”

Trump Fires Back After Biden’s Jan. 6 Speech: “This Political Theater Is All Just A Distraction For The Fact Biden Has Completely & Totally Failed”