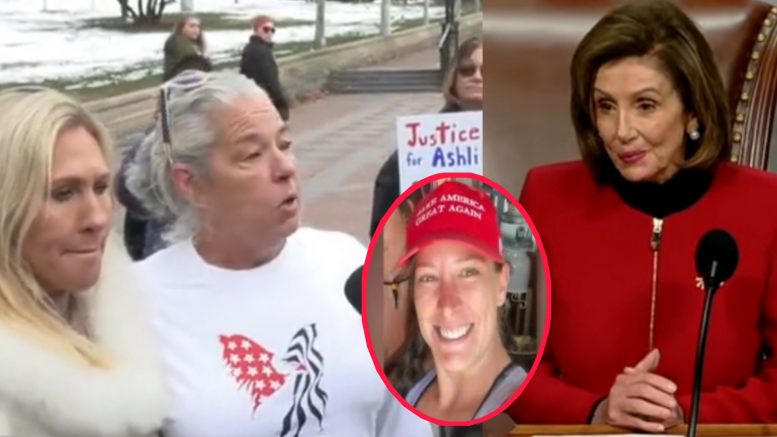 The mother of Ashli Babbitt, the woman shot and killed by a Capitol police officer during the January 6th riot, lashed out at House Speaker Nancy Pelosi while standing outside the Capitol Building on Thursday on the one-year anniversary of her daughter’s death.

With GOP Reps. Marjorie Taylor Greene and Matt Gaetz standing by her side, Micki Witthoeft defended her daughter’s actions before demanding the release of 14,000 hours of video captured on Capitol security cameras that she claims is being withheld by Congressional leadership.

Related Article: Giuliani on Why Ashli Babbitt’s Shooter Hasn’t Been Named: “This Was a Completely Phony Operation – There’s a Whole Plot Behind This”

“I’m here because Americans do have the right to protest,” Witthoeft said. “It’s your right as an American citizen to protest.”

She continued, “I would also like to say to Nancy Pelosi… this is not your playhouse. It’s not your private domain. The surveillance cameras were put up to capture what happened that day. The American people have aright to see the 14,000 hours of footage. It’s not her personal footage.”

“You’re not the Queen, Nancy Pelosi,” declared Witthoeft. “This is America’s 14,000 hours of missing footage. We have a right to see it. That was the purpose of the cameras.” Video Below

Ashli Babbitt's mother on Jan. 6 anniversary: "You're not the Queen, Nancy Pelosi. This is America's 14,000 hours of missing footage. We have a right to see it."