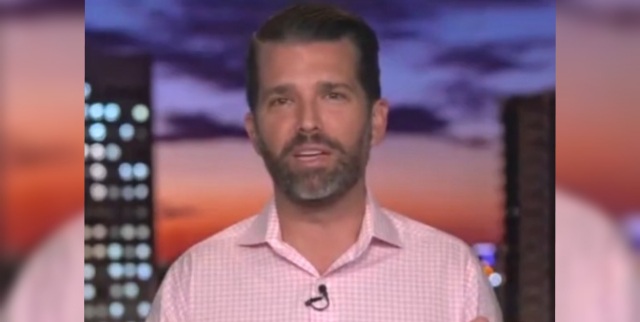 The Democrat party has fallen so far,” proclaimed Donald Trump Jr. on Saturday’s airing of Justice with Judge Jeanine.

The 45th President’s oldest son weighed in on the crime crisis that America is now facing.

“They’re literally, at this point, defending pedophiles and calling them heroes, ya know,” Don. Jr. said. “That’s just one example of many.”

He continued, “You saw the outrage over Jussie Smollett. I was one of the first people to call that one. Like, within a day or two of the incident just being like, ‘Does anyone actually believe this story?’ They tried to cancel me. They told me I was trying to spread conspiracy theories, I was a terrible human being. But, I was right because it was so obvious.”

“If all of America takes that position and pushes back against this nonsense Democrat narrative, I think we actually have a chance of maintaining our freedoms, our free speech and all of the things that made America the greatest country in the world. But the Democrats don’t care about that anymore. They are literally pushing lawlessness. They’re trying to turn us into the proverbial — let’s call it — S-hole country,” Don Jr. declared. Video Below

“The only thing [Hillary Clinton] is perhaps qualified on how to do a Masterclass on is how to never become President of the United States.” –@DonaldJTrumpJr responds to Hillary’s emotional reading of the 2016 speech that was never delivered pic.twitter.com/c8Sjh7idEL