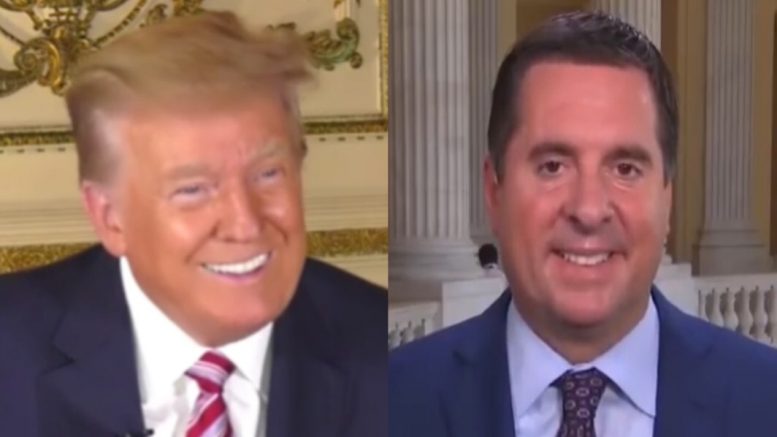 Rep. Devin Nunes (R-CA), Ranking Member of the House Intelligence Committee, will resign from Congress at the end of the year to join Trump Media & Technology Group (‘TMTG’) as Chief Executive Officer.

Mr. Nunes will be leaving the U.S. House of Representatives and will begin his new role as Chief Executive Officer of TMTG in January 2022, according to a press release from TMTG.

President Donald J. Trump, Chairman of TMTG, commented, “Congressman Devin Nunes is a fighter and a leader. He will make an excellent CEO of TMTG. Devin understands that we must stop the liberal media and Big Tech from destroying the freedoms that make America great. America is ready for TRUTH Social and the end to censorship and political discrimination.”

Congressman Devin Nunes added, “The time has come to reopen the Internet and allow for the free flow of ideas and expression without censorship. The United States of America made the dream of the Internet a reality and it will be an American company that restores the dream. I’m humbled and honored President Trump has asked me to lead the mission and the world class team that will deliver on this promise.”

Since 2003, Mr. Nunes has served in the U.S. House of Representatives, currently serving California’s 22nd district. As Chairman of the House Intelligence Committee (2015-2019), Mr. Nunes worked on important matters related to U.S. security including cybersecurity and information technology. Mr. Nunes is also a Presidential Medal of Freedom recipient, the organization said in a statement.

“I created TRUTH Social and TMTG to stand up to the tyranny of Big Tech. We live in a world where the Taliban has a huge presence on Twitter, yet your favorite American President has been silenced. This is unacceptable,” Trump said in a press release at the time.

“I am excited to send out my first TRUTH on TRUTH Social very soon. TMTG was founded with a mission to give a voice to all. I’m excited to soon begin sharing my thoughts on TRUTH Social and to fight back against Big Tech. Everyone asks me why doesn’t someone stand up to Big Tech? Well, we will be soon!” he added.

Former President Donald Trump has secured agreements from investors for $1 billion as he works to establish a social media platform to rival the Big Tech companies that deplatformed him. Trump announced on Dec. 4 that the pledges from unnamed investors will turn into investments once Digital World Acquisition Corp., a blank-check firm, and the social media group known as Trump Media & Technology Group Corp. are combined, Zachary Stieber at The Epoch Times reported. Continued Below

“$1 billion sends an important message to Big Tech that censorship and political discrimination must end,” Trump, the chairman of the group, said in a statement.

“Recently, I was presented with a new opportunity to fight for the most important issues I believe in. I’m writing to let you know I’ve decided to pursue this opportunity, and therefore I will be leaving the House of Representatives at the end of 2021,” Nunes told constituents, The Hill reported.

“Rest assured, I have not, by any means, given up our collective fight — I’ll just be pursuing it through other means,” he added.

America is ready for TRUTH Social and the end to censorship and political discrimination.”https://t.co/8JkaTtKPGs