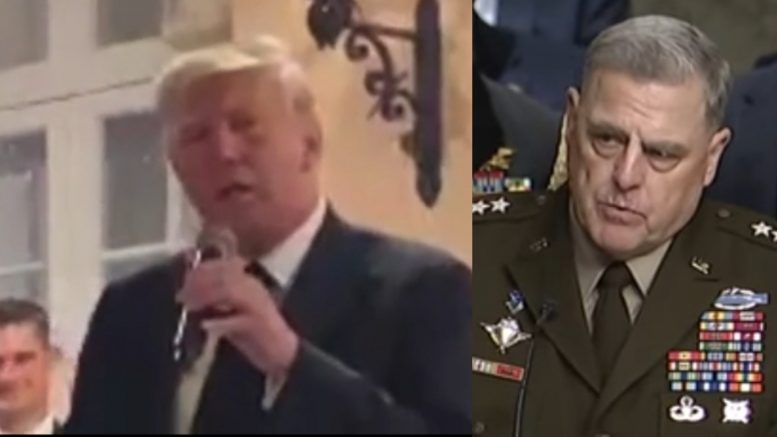 The situation unfolded as Trump spoke at an event held at his Mar-a-Lago beach resort, and recalled an interaction he had with Milley while serving as President.

Related Article: Trump Blasts The Story On ‘Dumbass’ General Milley & The Two Authors Who Wrote It

Apparently, Milley tried to convince Trump that “it was cheaper to leave the equipment” in Afghanistan “than to bring it.”

“I said, ‘What?’ We got a fifty million dollar airplane. We got a twenty-nine million dollar, gorgeous helicopter. We had every kind of helicopter, many of them brand new, literally out of the box — twenty-eight, twenty-nine million… seventy million dollar planes. ‘You mean you think it’s cheaper to leave it there so they can have it, than it is to fill it up with half a tank of gas and fly it into Pakistan to fly it back to our country?'” Trump said as he recalled the conversation and mocked Milley.

The event crowd then burst into laughter as Trump added, “That’s when I realized he was a f*cking idiot.” Video Below

Charlie Daniels To The Ayatollah: “In Case Nobody Has Told You Obama Is No Longer In Office”