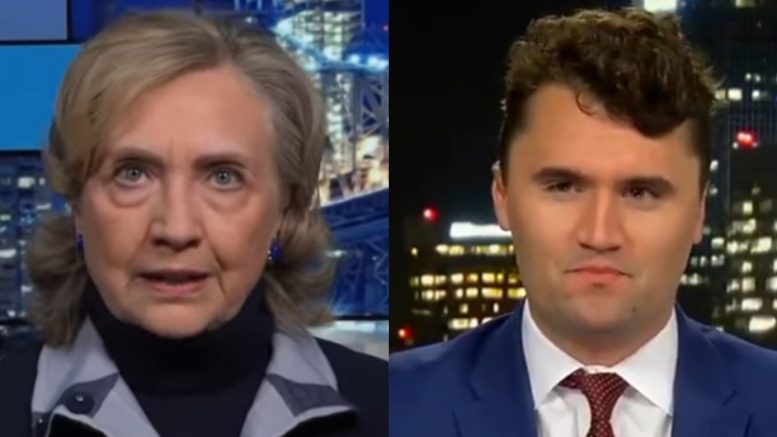 “If you are Hillary Clinton or Barack Obama or someone who actually wants to see America go a completely different direction, this regime is doing a good job,” conservative commentator Charlie Kirk said in reaction to recent remarks made by 2020 Presidential Election loser Hillary Clinton, where she slammed Americans who don’t “appreciate” of the work of the Biden Administration.

“A lot of people got, oh I think, kind of frustrated looking at the messy process of legislation,” Hillary told MSNBC host Rachel Maddow on Tuesday. “They really didn’t appreciate that within a year the Biden Administration has passed two major pieces of legislation through both the House and the Senate.”

Related Article: Donald Trump Jr.: ‘Joe Biden Is Overseeing the Destruction of Our Country’ – ‘All You See Is Idiocy’

In response, Charlie Kirk stated as follows during Saturday’s airing of Justice with Judge Jeanine:

If you want to the government to be more powerful, if you want the ruling class to remain untouched, then this regime is hitting it out of the ballpark. But if you care about normal things — Is it easier to have kids? Is it easier to build a family? Can you afford Thanksgiving? Can you buy Christmas gifts? — then of course this administration is failing miserably.

But Hillary Clinton has always been focused on the fundamental transformation agenda. And if it’s actually what you’re concerned about, then I guess you can say Biden is succeeding but only if you want what’s worse for America. Video Below

Hillary Clinton believes Americans aren’t giving the Biden Administration enough credit and that we are unappreciative. @charliekirk11 discusses this and much more on “Justice.” pic.twitter.com/7Wgjd5JPmT

Doocy to Jean-Pierre on Biden’s ‘Student Loan Relief’: ‘Who is Paying for This?’