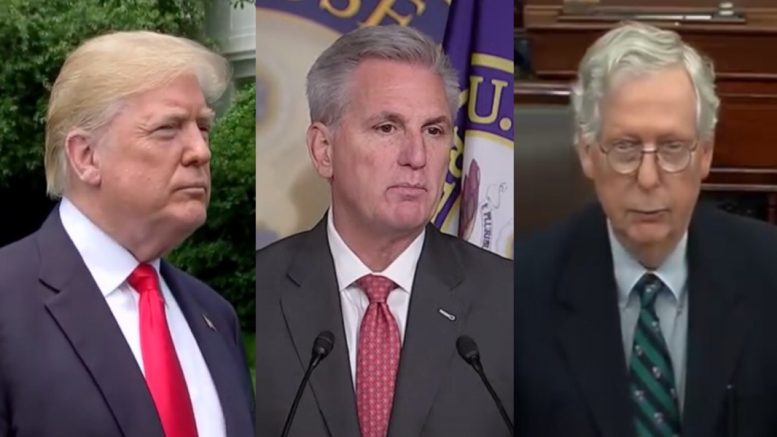 45th President Donald J. Trump issued a statement via email from his “Save America” PAC on Tuesday, lambasting Senate Minority Leader Mitch McConnell (R-KY), who he called “Broken Old Crow”, for allowing Democrats “a two-month extension” to pass their $1.2 trillion infrastructure package in the House on November 5th.

Trump’s statement comes as Democrats are now trying to pass the “Build Back Better” bill, a whopping $1.75 trillion proposal that reportedly aims to expand the social safety net in the United States and also contains over $500 billion to allegedly combat climate change. The 45th President warned GOP lawmakers they “will never ever get a Trump Endorsement” if they vote “for this Bill”.

When the Broken Old Crow, Mitch McConnell, agreed to a two-month extension, he allowed the Democrats to get their act together and pass the $1.2 Trillion “Non-Infrastructure” Green New Deal Bill, which is a disaster for America in that only 11% of the money will be spent on REAL Infrastructure, with most being spent on Green New Deal nonsense, with big tax increases.

Its actual cost is over $2 Trillion, but the bigger disaster is yet to come in the next, much larger version of the Green New Deal, which some people say will be $5 Trillion. This was all allowed by Mitch McConnell’s incompetence and now I understand that a couple Republican Senators may get on board so that they can have yet another and even bigger victory, for the Democrats, while at the same time ensuring massive Inflation and the destruction of our Country as we know it.

This is what happens when you allow a guy who lost an Election to take over the Office of the President. He obviously had no mandate, but they’re changing our Country and everything it stands for. Mitch McConnell couldn’t stop the first Bill so 19 Senators, including himself, joined in. That’s what he does—if you can’t beat them, join them. If he wasn’t so stupid and didn’t give the two-month extension, he could have stopped it all.

Now he and his RINO friends will allow a much bigger and far worse Bill to pass, ruining our Country while giving the Democrats a great political lift, all at the same time. People, with the help of the Fake News Media, have already forgotten about the horrendous Afghanistan withdrawal, an economy and jobs that are in shambles, and so many other things. Continued Below

The good news is, they can’t forget about Inflation because it’s hitting them right in the face. This is the Broken Old Crow’s fault. He could have won it all using the Debt Ceiling—they were ready to fold. Now the Democrats have a big victory and the wind at their back. McConnell is a fool and he damn well better stop their “Dream of Communism Bill” and keep his Senators in line, or he should resign now, something he should have done a long time ago.

Use the Debt Ceiling like it should have been used, you Old Broken Crow, to do so would hurt our Country far less than this horrible Bill.

Any Republican in the House or Senate who votes for this Bill will never ever get a Trump Endorsement. Thank you, and good luck! Continued Below 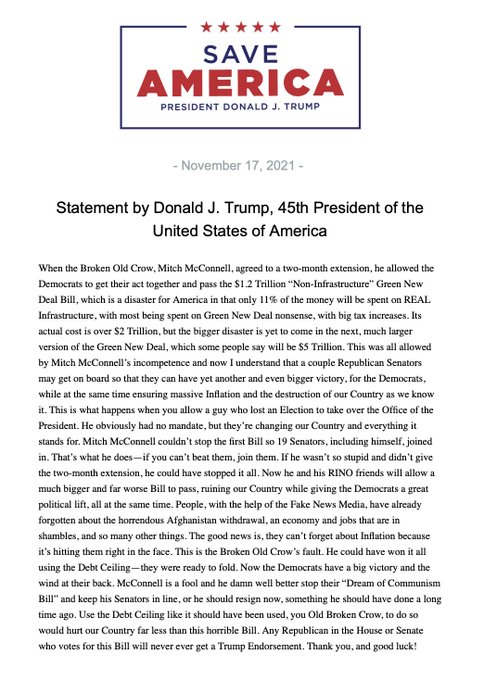 ‘Shill of the Establishment’: Rep. Gaetz on why he’s not Voting Kevin McCarthy for House Speaker