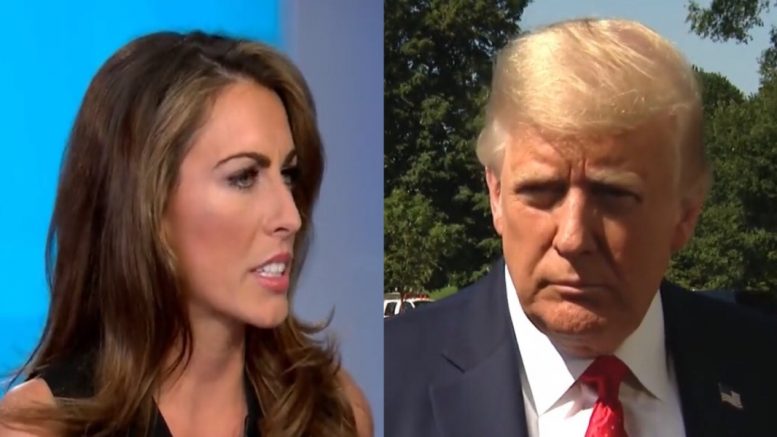 45th President Donald J. Trump issued a statement on Monday via email from his “Save America” PAC firing back at his former communications director, Alyssa Farah, after she claimed on CNN over the weekend that her former boss told her that “he lost” the 2020 presidential election.

“He knew,” Farah told CNN’s Pamela Brown. “He told me shortly after that he knew he lost.”

.@Alyssafarah to @PamelaBrownCNN: "(Trump) knew, he told me shortly after that he knew he lost. But then folks got around him, they got information in front of him and I think his mind genuinely might have been changed about that and that's scary because he did lose." pic.twitter.com/Zk0K2MAKpI

“Heard that Alyssa Farah was terrible on The View—they could have asked the people who know her and saved a lot of time. She was a ‘backbencher’ in the White House, and is now a nobody again. We put her out there to face the public as little as possible,” Trump said, referring to her October appearance on ABC’s The View.

“It’s amazing how these people leave with respect and adoration for me and others in the White House, but as soon as CNN or other cameras get shoved in their face, or the losers from the The View ask a question, or money gets thrown at them, or someone writes a fake book, inglorious lightweights like Farah change so quickly,” he said. Continued Below

“I watched this clown on television saying exactly what they wanted her to say and I watched the lies. Was she paid by low-ratings CNN? By the way, as soon as the Crime of the Century happened on November 3rd, I knew the Election was Rigged and Stolen, and never changed my view on that one bit,” Trump continued.

“I did not go soft on the ‘Real’ Big Lie, the Election Scam, and never will. Backbencher said I told her I lost the Election—never did. I virtually never even spoke to Farah (it’s like she didn’t even exist in the White House),” he confirmed. “Anybody who ever says that I thought the Election was legit, even for a moment, is wrong. All you have to do is look at the thousands of pages of documents and evidence—which continues to mount”.

‘When we told Alyssa to ‘hit the road,’ she wrote a very nice letter stating that working for ‘Trump’ was ‘the honor of a lifetime’ and she was ‘deeply proud of the incredible things we were able to accomplish to make our country stronger, safer, and more secure.’ Show the rest of the letter Alyssa, and explain why you wrote it!” the 45th President recommended. Continued Below 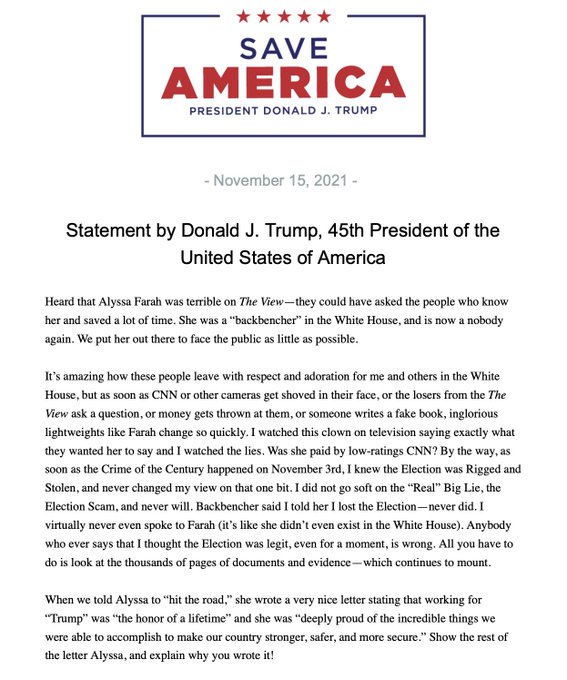 Alyssa Farah’s full interview on CNN over the weekend: