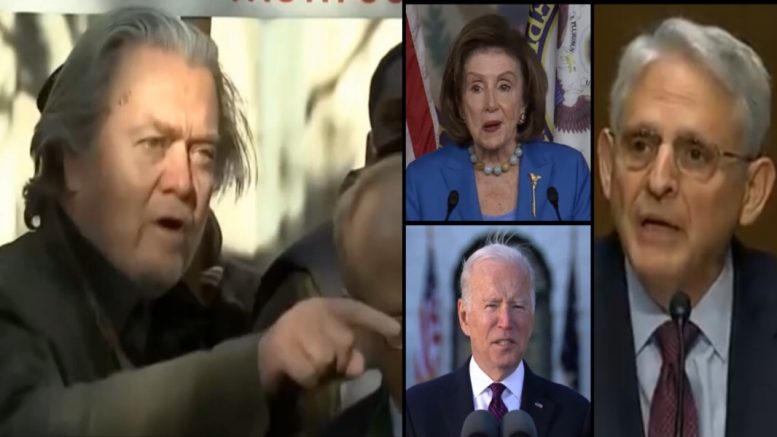 Steve Bannon, former White House’s chief strategist for 45th President Donald Trump, was indicted Friday, according to Joe Biden’s Justice Department, for two counts of contempt of Congress after he defied a congressional subpoena from the House committee investigating the January 6 breach of the U.S. Capitol. The Justice Department said Bannon was indicted on one count for refusing to appear for a deposition and the other for refusing to provide documents in response to the committee’s subpoena, as previously reported by The Freedom Times.

Bannon appeared before a D.C. court on Monday, and had urged supporters outside of the FBI Office in D.C. to focus on “signal, not noise”. He later vowed to deliver Joe Biden, Merrick Garland, and Nancy Pelosi the “misdemeanor from hell” after emerging from court.

🚨 Moments ago outside FBI Field Office in D.C., Stephen K. Bannon urges supporters to focus on "signal, not noise," and stay tuned into War Room: Pandemic, which goes live in minutes on https://t.co/MG9jTpnslD and on @RealAmVoice.

CBS News’ Senior Investigative Correspondent Catherine Herridge tweeted on Monday that Bannon had “been transported inside the district courthouse”.

he will depart following the hearing on criminal contempt charges. Also appear to be assessing sites for potential press comments after hearing via @NicoleSganga

Herridge followed up by reporting that Bannon’s appearance in court “lasted about 22 minutes” and “responded to limited questions”, adding, “Next appearance 11/18 for arraignment.”

travels outside the DC area, cannot travel outside the US without court approval, has surrendered his passport. Next appearance 11/18 for arraignment.

After Bannon emerged from the D.C. federal courthouse on Monday, he vowed to deliver Joe Biden, Merrick Garland, and Nancy Pelosi the “misdemeanor from hell”.

“I’m telling you right now, this is gonna be the misdemeanor from hell for Merrick Garland, Nancy Pelosi, and Joe Biden. Joe Biden ordered Merrick Garland to prosecute me from the White House lawn when he got off Marine One. And we’re gonna go on the offense,” Bannon said.

“We’re tired of playing defense, we’re gonna go on the offense on this, and stand by. By the way, you should understand that Nancy Pelosi is taking on Donald Trump and Steve Bannon. She ought to ask Hillary Clinton how that turned out for them, okay? We’re going on the offense,” he fired off.

"This is going to be the misdemeanor from hell for Merrick Garland, Nancy Pelosi, and Joe Biden." 🔥🔥🔥 pic.twitter.com/m2Ia57a1eV

“Remember, what we’re doing is taking on the illegitimate Biden regime. Don’t ever let this noise up here take you off message.”

Steve Bannon live on #GETTR via #WarRoom delivers a statement while leaving the FBI Field office.#StandWithSteveBannon

In an email statement on Sunday, 45th President Trump slammed the “radicalized” left and suggested that no one has faced persecution like Steve Bannon.

This Country has perhaps never done to anyone what they have done to Steve Bannon and they are looking to do it to others, also. If they would be so tough with China, Russia, and the world, who no longer respects us, maybe our Country would not be failing at a level at which we have never seen before. We never talk about making our Country great, and it is now heading in an unthinkable direction with the Afghanistan withdrawal, open Borders, Inflation, Woke everything, and so much more. The USA is a radicalized mess! 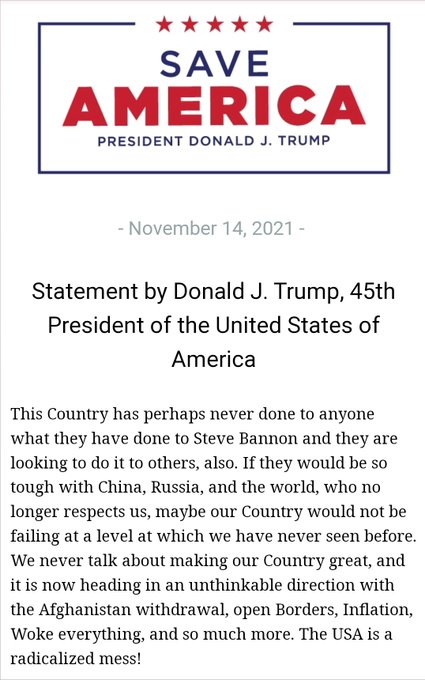 (Related: Flynn on Bannon’s Indictment: ‘It Shows the Speed in Which the Democratic Party Is Moving to Confirm Their Complete Takeover of This Country’)

‘Get Ready for Prices to go Even Higher’: Rep. Jordan Warns of ‘Strike’ as Biden’s Railroad Union Deal Falls Apart