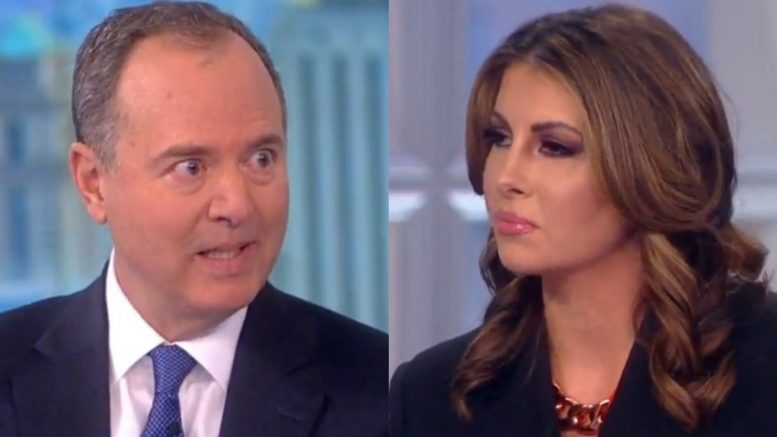 Guest co-host of The View, Morgan Ortagus put the heat under House Intel Chairman Adam Schiff on Tuesday regarding the Steele Dossier that the Democrat politician often referenced throughout much of Donald Trump’s presidency.

The infamous dossier has since been debunked as false. Meanwhile, special investigator Robert Durham recently arrested Igor Danchenko, a Russian analyst who worked with Christopher Steele and is believed to have been a major source for contents found in the anti-Trump hit-piece, which played a central role in launching the Trump/Russia collusion investigation.

“You’ve been really prolific over the past few years being the the head of the [House] Intel Committee and you’ve defended, promoted — you’ve even read into the Congressional record the Steele Dossier,” Ortagus said to Schiff during Tuesday’s airing of The View. “We know last week the main source of the dossier was indicted by the FBI for lying about most of the key claims in that dossier. Do you have any reflections on your role in promoting this to the American people?”

Schiff bounced around trying to answer the question, yet denied having been part of promoting the phony dossier. Instead, he pointed the finger at those who were responsible for publishing the hit-piece and recommended that allegations be investigated.

Pressed further on his “culpability” in promoting the dossier, Schiff clearly appeared to be irritated as he replied, “I completely disagree with your premise. It’s one thing to say allegations should be investigated, and they were. It’s another to say we should have foreseen an advance that some people were lying to Christopher Steele, which is impossible, of course, to do.”

“No, I think just your credibility is,” Ortagus fired back.

“I think the credibility of your question is in doubt,” Schiff replied with a perturbed look on his face. Video Below

Pressed by #TheView guest co-host @MorganOrtagus on the Steele dossier, @RepAdamSchiff responds: “It’s one thing to say allegations should be investigated…it’s another to say we should have foreseen in advance that some people were lying to Christopher Steele.” pic.twitter.com/8EgvKW0tgJ

Bernie Calls Trump A ‘Coward’ For Wanting Voter ID, Crenshaw Fires Back: It ‘Defies Logic’ To Not Want Voter ID