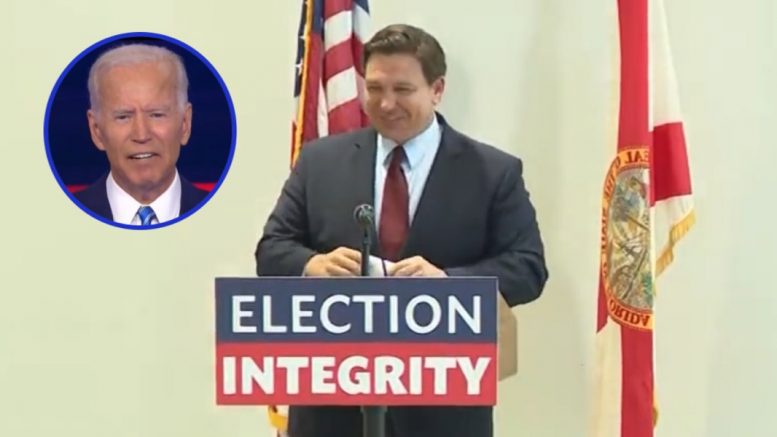 Cheers and chants of “Let’s go, Brandon” erupted in the room after DeSantis made the light-hearted joke.

Governor DeSantis spoke in part about Big Tech, the Republican wins in Virginia on Tuesday, and corporations’ “woke agenda.”

“If you look at all the things that are going on, you see Big Tech, you see the corporate media — although they weren’t too happy with Virginia last night,” the Florida governor said. “If you look at that. If you look at what’s going on with some of the big corporations with their woke agenda.”

The meme of “Let’s go, Brandon” took the country by storm after an NBC reporter used the phrase to describe a NASCAR crowd that was chanting “F**k Joe Biden.” Video Below

Governor DeSantis announced the next legislative session would focus on election integrity, including the creation of a separate office at the state level that would investigate election fraud.

He said the session would create a separate office that is dedicated to investigating and prosecuting election fraud, which would have law enforcement officers and investigators part of the new office.

“If someone’s ballot harvesting, you report it to these people and this is their sole job,” the Florida governor said. “Some of these counties, some of them will do the cases but that’s not their expertise. They got all these other crimes that they have to deal with. So by the time it happens, the election’s already over.”

He also said ballot harvesting would be third-degree felony.