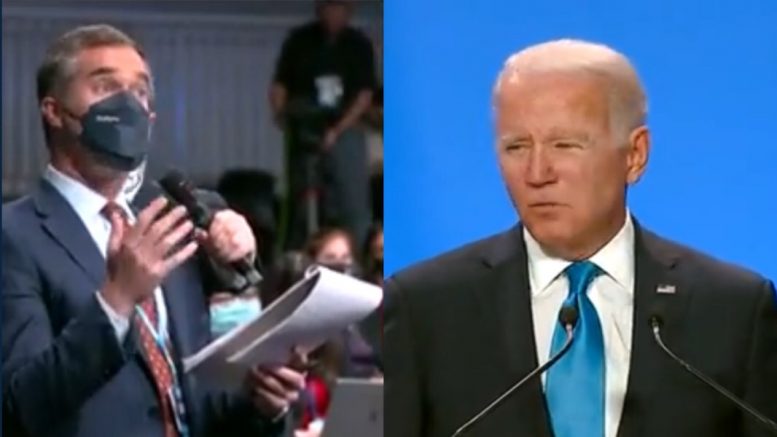 While taking questions from reporters at Tuesday’s COP26 climate summit in Glasgow, Scotland, 78-year-old Joe Biden blamed rising gas prices in America on Russia and the Organization of the Petroleum Exporting Countries (OPEC).

“You have said you have no short term answer to bring down gas prices. But as you know, it’s not just gas prices now. Rents are up. The cost of everyday items are up, inflation in the U.S. is in its thirteen year high. So when specifically, should Americans expect those prices to come down?” NBC News Chief White House Correspondent Peter Alexander asked Biden.

“Well, look, um. First of all, the significant reason why prices are up is because of covid affecting the supply chain,” the Democrat career politician claimed. “I mean, I know I’m not trying to be instruct … I mean, I know you know this, number one.”

“Number two: um, if you take a look at the, you know, gas prices and you take a look at uh, oil prices, uh, that is a consequence of, thus far, the refusal, of uh, of uh, Russia or uh, or the OPEC nations to um, pump more oil,” he alleged.

“Um, and we’ll see what happens on that score uh, sooner than later,” Biden said.

On energy, President Donald Trump Made America Great Again. In 2019, after 62 years, the United States achieved energy independence, meaning that as a nation we produced more energy than we consumed. In 2019, the United States produced more oil and more natural gas than either Russia or Saudi Arabia. In fact, in June 2020, the U.S. actually exported oil to Saudi Arabia! American Energy Alliance reported. Continued Below

Soon after taking office, however, Biden signed an executive order pausing new oil and gas leasing on federal lands in an effort to reportedly combat climate change. In June, the Interior Department led by Secretary Deb Haaland also suspended the Coastal Plain Oil and Gas Leasing Program in the ANWR “pending completion of a comprehensive analysis under the National Environmental Policy Act (NEPA)”, as previously reported by The Freedom Times.

Also in June, the developer of the Keystone XL pipeline announced it was pulling the plug on the project after the Biden administration revoked its permit in January for the 1,210-mile pipeline that would have delivered crude from Canada’s Alberta oil sands to refineries on the Gulf Coast.

Biden, on his first day in the White House, revoked the permit that President Donald Trump granted to Keystone XL and also moved to re-enter the United States in the Paris climate agreement. TC Energy warned at the time that the decision by Biden would “directly lead to the layoff of thousands of union workers”, as previously reported by this publication. Continued Below

BIDEN: The increase in gas and oil prices is "the consequence of the refusal of Russia or the OPEC nations to pump more oil." pic.twitter.com/A5Gg5L0eee

Over four years ago, President Trump said the completion of the Keystone Pipeline would create thousands of jobs and energy independence for America.

Trump had warned Americans during the 2020 presidential campaign, that Biden would “destroy” the oil industry. During the second debate last year, Biden said he “would transition from the oil industry”.

‘I’m Sorry the First Lady is not Enjoying Herself More’: Sen. Kennedy on Jill Biden Defending her Husband’s Failed Agenda

WATCH: Focus Group Shocks CBS Host After They Agree America Is Not In A Better Place Than It Was One Year Ago