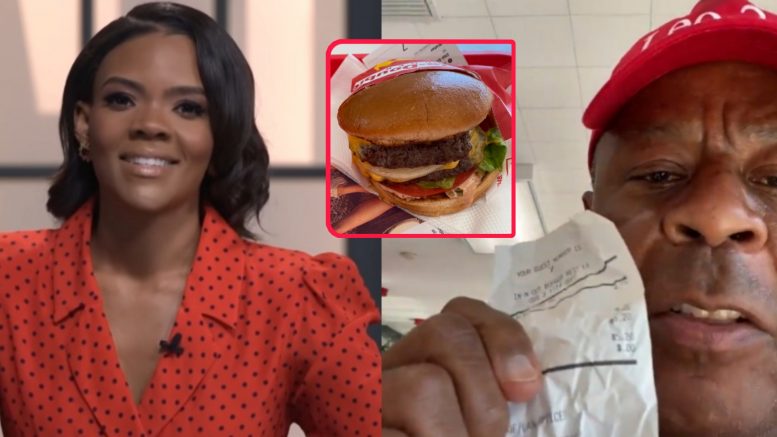 Candace Owens and Leo Terrell gave their stamp of approval to In–N-Out Burger after the fast food company stood up to San Franciscon California’s vaccine mandate and refusing “to become the vaccination police for any government.

According to Fox News, “The San Francisco Department of Public Health closed the Fisherman’s Wharf In-N-Out location on Oct. 14 after the popular burger joint did not check the vaccination status of customers, which violates an August mandate from the city requiring indoor diners to show proof of vaccination.”

As per another Fox article:

The West Coast-based burger chain In-N-Out was widely praised on social media after it was reported that the company refused to enforce a San Francisco, California vaccine mandate for customers that resulted in the city temporarily closing one of its locations.

The fast-food chain trended on Twitter Tuesday after the company told the city of San Francisco “we refuse to become the vaccination police for any government” and was closed temporarily by the city’s health department for not demanding customers show proof of vaccination against the coronavirus.

Candace Owens joined in the social media frenzy on Wednesday as she posted a picture of herself enjoying a burger and fries at the fast food restaurant.

Owens captioned the image, “Dear @innoutburger and @ChickfilA, Thank you for serving the unvaccinated AND the vaccinated. Business without discrimination. Businesses that would have served black people in the Jim Crow era.”

“God bless those who refuse government ‘mandates’ that demand discrimination,” she added.

Dear @innoutburger and @ChickfilA,
Thank you for serving the unvaccinated AND the vaccinated.
Business without discrimination. Businesses that would have served black people in the Jim Crow era.
God bless those who refuse government “mandates” that demand discrimination. 🇺🇸 pic.twitter.com/m4vhpIkycH

Meanwhile, Fox News contributor Leo Terrell followed through on his promise from a day earlier and visited an In-N-Out in Los Angeles, California to show his support for the burger chain on Wednesday.

Here are some camera shots from Mr. Terrell’s visit:

Leo Terrell Slams Katie Couric over Her RGB Coverup: ‘She Was Not Protecting Ginsburg – She Was Protecting the Far Left’