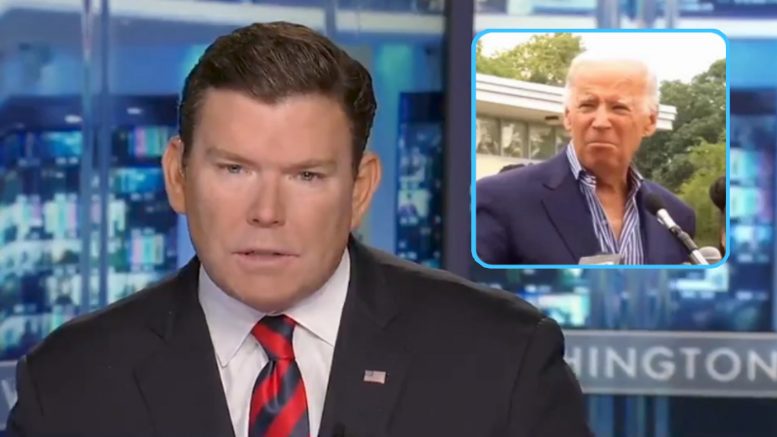 Fox News anchor Bret Baier thinks that the Biden administration is about to really start feeling the heat from the American public as the supply chain crisis threatens to disrupt the holiday shopping season and store shelves across the country continue to grow more and more empty.

As reported by The Hill, “Shortages in the global supply chain are creating steep challenges for President Biden at a time when he’s already grappling with low approval ratings and major hurdles to getting his economic agenda through Congress.”

Reacting to the “empty shelves” crisis, Baier stated as follows on Saturday’s airing of Justice with Judge Jeanine:

I do think that this administration is going to feel the political onus of owning this once we get to the point of the shelves being empty. In part, because the press secretary came out, Jen Psaki, and said that they had been working on it for months and there was a task force working on it, but we really hadn’t heard anything about that.

We hadn’t heard from the transportation secretary (Pete Buttigieg). We hadn’t heard about the efforts to get this to come around. And, if anything, the administration and Democrats on Capitol Hill have been pushing the extension of unemployment, which many critics of the administration argue is extending the inability to get truck drivers and other jobs filled to get those items on the shelves.

Asked if he had ever seen a president with so many problems, Baier replied:

No, and it is politically a big uphill battle because you can add to that really the concern about inflation. That really factors in, especially the people at home who are feeling at the gas pump, at the grocery store, the booster shot back and forth, whether we are getting them, not getting them, where that was and the communication about it. And then add to all of that mix… crime in big cities, which is going going up.

So, politically this administration is in a very tough spot… The president is weakened at home and abroad just by his political position. Republicans are in a good place heading in to 2022, but as you know there’s a long time before 2022.

We are seeing empty shelves across the country as a supply chain crisis continues to erupt from coast to coast and @BretBaier joins “Justice” to break it all down. pic.twitter.com/jhOl16bHn1

Tomi Lahren Blasts Kamala Harris After Visiting The Border: “She Hasn’t Gone Down — She Hasn’t Done What I’ve Done”