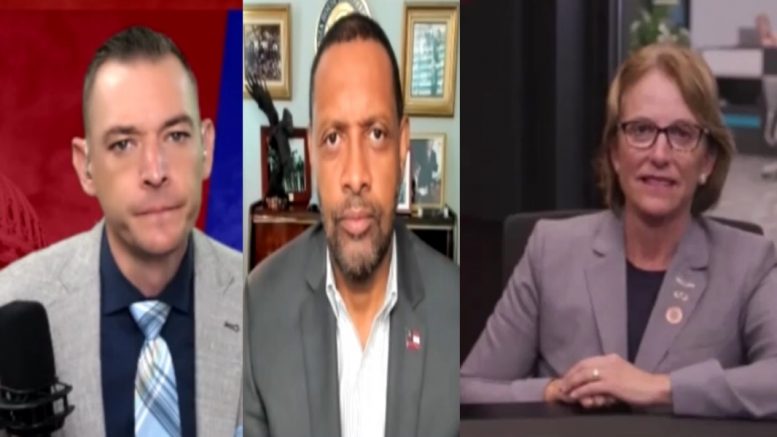 During an interview on the “Stew Peters Show”, Peters confronted Jones over previous reported “anti-white hate” and “sex” scandals from the former Georgia State representative’s past.

“In 2004, you were sued for successfully attempting to create a darker administration to reflect the new DeKalb County. In the trial, the plaintiffs dug up accidentally recorded conversations between an assistant county manager, Morris Williams, and county H.R. Director Joe Stone. In that call, Stone said he was angry that the fire chief wanted to promote four white men to battalion chief. He complained that the group is too ‘snow white’. But then, Stone says, ‘Now he got to cut that sh*t out with Vernon’. So if there was no racial discrimination going on in DeKalb County then, why would Stone have said that?” Peters asked Jones.

Peters was referencing a case in 2010, where a federal court jury awarded two former DeKalb County parks employees $185,000 in damages in the long-running racial discrimination case against the county. In the culmination of a case that wound through the courts for six years, the jurors found that former DeKalb CEO Vernon Jones, Jones’ former executive assistant, Richard Stogner, former parks director Marilyn Boyd Drew and DeKalb County itself were all liable for damages, The Atlanta Journal Constitution reported.

The interview with Peters and Jones ultimately turned heated when Jones accused Peters of pushing a “completely false, erroneous, reckless” story, adding, “When you try to be holier-than-thou, oh, you’re different from everybody else. No, you’re not. You’re here with a bunch of foolishness.”

Jones appeared to want to move on to the next subject, but Peters told the Georgia gubernatorial candidate, “You’re not going to avoid the real questions here. … You’re accusing them of lying and you’re accusing me of me of being foolish.” Peters muted Jones’ microphone for the remaining interview, then explained Jones’ reported scandals to his audience. Continued Below

“In light of this information revealed on the Stew Peters Show, and other information that I know will be coming out, I am withdrawing my endorsement of Vernon Jones for Georgia Governor,” Senator Rogers said.

“Lin Wood was right and I should have listened to my brother in Christ. I call on Vernon Jones to remove my endorsement off all campaign materials and website immediately,” she stated. Continued Below

Full interview with Stew Peters and Vernon Jones. Fast forward to the 11:56 mark:

in Christ. I call on Vernon Jones to remove my endorsement off all campaign materials and website immediately. (2/2)

She added on Friday morning:

Stew Peters, Steve Bannon, OAN and the other alternative media shows are the future. CBS, Fox News, MSNBC, etc are all controlled programming and are a dying breed. President Trump's greatest achievement is that he exposed the #FakeNews #MockingbirdMedia.

Meanwhile, Lin Wood tweeted the following on Telegram Thursday in response to the interview with Peters and Jones and Senator Rogers pulling her endorsement from Jones:

Keith Olbermann Urges MLB Players To Boycott Games In Protest Of GA Election Laws, Leo 2.0 Reacts: “I Would Love To Debate You”