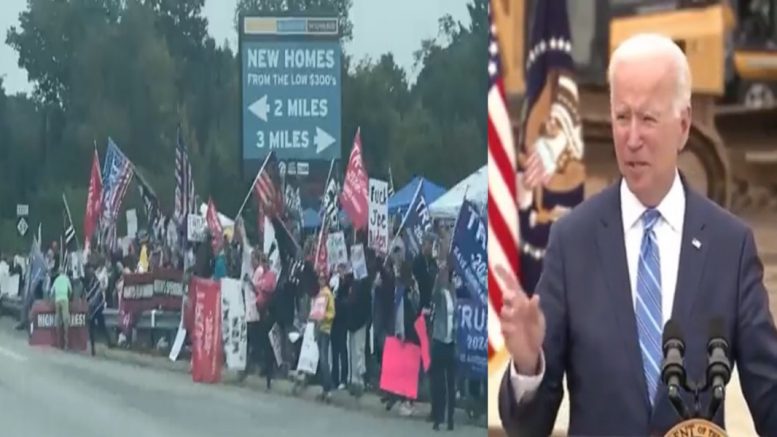 Protestors gathered in Howell, Michigan on Tuesday with “F*ck Biden” and “Trump Won” flags and signs ahead of 78-year-old Joe Biden visiting a union training facility to discuss his alleged economic agenda, as previously reported by The Freedom Times.

Biden, while delivering remarks over the infrastructure bill and his Build Back Better agenda, commented on the signs and flags he saw from the protestors, claiming, “81 millions Americans voted for me”.

“… Not withstanding some of the signs I saw coming in … that’s why 81 million Americans voted for me, the largest number of votes in American history,” Biden had said, in part, over his seemingly far left agenda.

"Not a joke": At his Build Back Better agenda address in Michigan, President Biden spoke about his "Grandpop," the "zero, zero, zero" cost of his plan, the state of Texas having "no resilience," and "why 81 million Americans voted for me." pic.twitter.com/DR0mOG5yci

Here are a few videos capturing what Biden was referencing during his Michigan visit:

This is how Biden was greeted in Michigan today pic.twitter.com/T825RSqfYL

(Related: Michigan Resident Vents His Frustration Over Biden’s Visit: ‘I Wish He Would Just Stay Out Of This State & Leave Us Alone’)

Biden: ‘When it Comes to the Gas Prices, We’re Going Through an Incredible Transition…Less Reliant on Fossil Fuels’