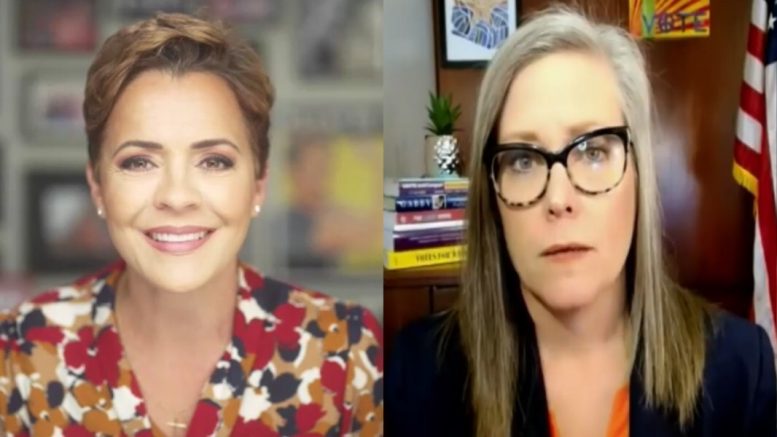 Arizona gubernatorial candidate Kari Lake (R), who has received an endorsement from 45th President Donald J. Trump this week, believes she has a good chance of beating her Democrat opponent Katie Hobbs, who currently serves as Arizona’s secretary of state.

The 2022 Arizona gubernatorial election will take place on November 8, 2022, to elect the next governor of Arizona. Incumbent Republican Governor Doug Ducey is not eligible to run for a third consecutive term, as Arizona is one of twenty-seven states that prohibits its governors from serving more than two consecutive terms, as reported by Wikipedia.

Asked if she thinks it is going to be an easy race against Katie Hobbs, Kari Lake told host Steve Bannon during a Wednesday interview on Real America’s Voice “War Room”, “I think Katie Hobbs is gonna have a really tough time campaigning from behind bars, to be honest.”

“That’s where that woman might be in short order. … She’s basically the mastermind of the 2020 election here in Arizona. [The] secretary of state oversees the election. And we know, and we saw it proved last Friday when we saw the forensic audit report detailed for us, all of the fraud, all of what appears to be criminal activity,” Lake said.

“I mean, who goes in the day before and deletes millions of election files the day before the audit is to begin? That is criminal. That’s against the law. They broke numerous state laws … numerous election laws. They should have never certified that election, and Katie Hobbs sat there, right next to our governor, Doug Ducey, and certified that election,” she explained.

Lake was referencing a compelling discovery found during the Maricopa County forensic audit by Ben Cotton of CyFir, who revealed during last week’s Senate hearing — that election results were purged from the EMS the day before the audit began in Maricopa County. Continued Below

When asked if she has seen enough in the Arizona audit report(s) and if Arizona Attorney General Mark Brnovich should take action, the Arizona gubernatorial candidate responded, “Absolutely. … I’m gonna text Mark Brnovich and tell him he must do the right thing.”

“The fate of our nation is resting squarely upon Mark Brnovich’s shoulders right now. Does he want to be the hero that saved this Republic, or does he want to go down in history as the man who let it go? We have proof right now and evidence, and he needs to now make it a crime scene. He needs to gather up all of the ballots … seize all of the equipment … open a criminal investigation immediately,” Lake urged. Video Below

The letter comes after last week’s release of the Maricopa County forensic audit results, which were revealed during Friday’s Senate hearing and after Senate President Karen Fann sent a letter to the Arizona attorney general on Friday, calling for Brnovich to open a criminal probe over “several items in the reports that merit your attention of your office”.

(Related: Wendy Rogers to AZ’s Secretary of State: ‘You Will Not Be Governor – You Are Going to the SLAMMER’)