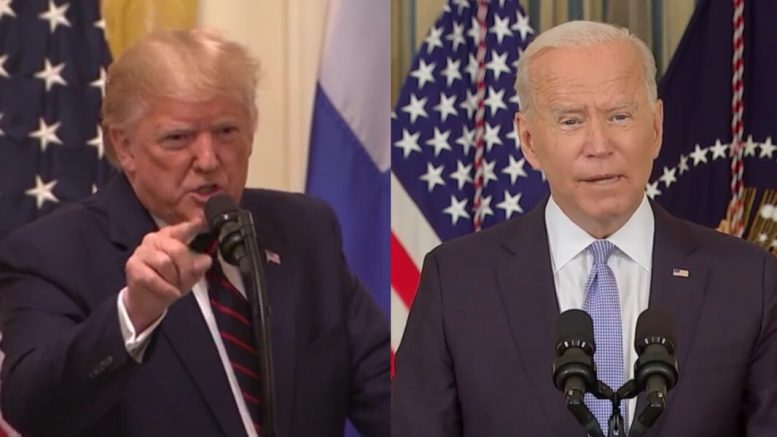 45th President Donald J. Trump issued a pair of statements on Friday morning via email from his “Save America” PAC ahead of the highly anticipated Maricopa County forensic audit report(s), which is set to be released during a Friday Senate hearing at 4 pm ET.

Ahead of the hearing, however, Maricopa County officials and the mainstream media appear to be trying to get ahead of the Maricopa County forensic audit final results based on a single line from a “leaked draft“, which circulated on Thursday evening.

As an example, AZ Central, a left-leaning publication, reported: “The draft report shows there was less than a 1,000-vote difference between the county’s certified ballot count and the Cyber Ninjas’ hand count. The hand count shows Trump received 45,469 fewer votes than Biden. The county results showed he lost by 45,109″.

The 45th President countered the mainstream’s reporting, writing in a first statement, “Huge findings in Arizona! However, the Fake News Media is already trying to ‘call it’ again for Biden before actually looking at the facts—just like they did in November! The audit has uncovered significant and undeniable evidence of FRAUD!”

“Until we know how and why this happened, our Elections will never be secure. This is a major criminal event and should be investigated by the Attorney General immediately,” he urged. “The Senate’s final report will be released today at 4:00PM ET. I have heard it is far different than that being reported by the Fake News Media.”

In a second email statement, Trump declared, “The Fake News is lying about the Arizona audit report! The leaked report conclusively shows there were enough fraudulent votes, mystery votes, and fake votes to change the outcome of the election 4 or 5 times over.” Continued Below

“The number includes 23,344 mail-in ballots, despite the person no longer living at that address. Phantom voters! The official canvass does not even match who voted, off by 11,592—more than the entire Presidential Election margin. Voters who voted in multiple counties totaled 10,342, and 2,382 ballots came from people who no longer lived in Maricopa County. There were also 2,592 ‘more duplicate ballots than original ballots'”, the former president explained of the leaked draft report.

“Just those fraudulent ballots alone total 50,252, and is fraud many more times than the so-called margin of “victory,” which was only 10,457. In addition, election data appears to have been intentionally deleted, and ballot images were ‘corrupt or missing.’ This is not even the whole state of Arizona, but only Maricopa County. It would only get worse!” Trump said.

“There is fraud and cheating in Arizona and it must be criminally investigated! More is coming out in the hearing today,” the 45th president warned. Continued Below

The draft report reveals there are at least 42,727 ballots that are categorized as “critical” or “high” impact discrepancies. These include ballots mailed from addresses where the voters no longer live (23,344), voters who voted in multiple counties (10,342), and more ballots returned by voters than received (9,041), as reported by NoQ Report.

The draft report also states: “Mail-in ballots were cast under voter registration IDs for people that should not have received their ballots by mail because they had moved, and no one with the same last name remained at the address. Through extensive data analysis we have discovered approximately 23,344 votes that meet this condition. Mail-in ballots are, by Arizona law A.R.S. § 16- 558.01, never forwarded.”

Boris Epshteyn tweeted a screenshot of “the number of illegal ballots found” in Maricopa County revealed from the draft report:

To all those trying to spin the Arizona Audit, spin this:

The number of illegal ballots found in Maricopa County alone is over 4 times the current amount separating President Trump and Joe Biden in Arizona as a whole.

🚫None of the County's election numbers match

🚫Illegal ballots counted from people who had moved

The "official results" vs. Maricopa County's final records of who voted are off by 11,592, which is MORE than the election margin

How can you certify results that the County can't even back up!#decertify pic.twitter.com/C4JS283hG6

2,081 ballots from people who moved outside of the state

For some inane reason, Arizona still allows people who move out of state to vote for president, BUT the voting machines do not do "presidential-only ballots" as required pic.twitter.com/CUFmV9w2Gu

I’m told the audit report that was leaked was an edited version that had only been sent to one person. Supposedly someone with an ethical obligation to keep information private.

(Related: Sen. Rogers On The Maricopa County ‘Leaked Draft’ Report: “Hearing Will Render Findings Of Great Consequence…God Is In Control”)

Sen. Fann Reveals AZ Audit Lies: If Something Was Done Criminally, ‘I’m Gonna Turn It Over To The AG’s Office’