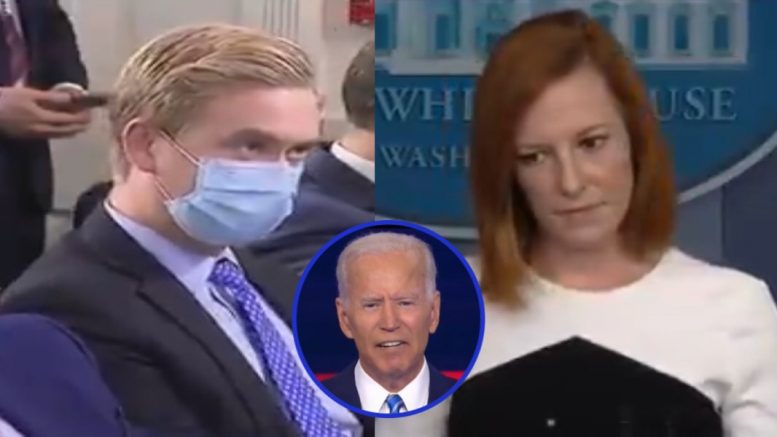 During a Wednesday White House press briefing, Fox News correspondent Peter Doocy quizzed press secretary Jen Psaki over whether career politician Joe Biden has “ever been to the southern border”, amid the current Haitian migrant surge in Del Rio, Texas, which has exploded under the Biden administration.

Fox News’ Bill Melugin has posted video footage and pictures on Twitter over the last week, showing Haitian migrants walking across a dam in the Rio Grande, traveling to the International Bridge in thousands, and causing major concern for the already ongoing crisis at the southern border, occurring after Joe Biden and Kamala Harris took office, as previously reported by The Freedom Times.

“Has President Biden ever been to the southern border?” Doocy asked Psaki.

“In his life? … I will have to look back in my history books and check the times he’s been to the southern border,” Psaki replied.

“We have been looking all morning, and we cannot find any records of him visiting the border as president, vice president, senator, or even as a concerned citizen. Why would that be?” Doocy then wondered.

Asked why he is pressing the subject matter, Doocy said, “Because this is a president who makes a point when there are disasters in this country like a wild fire or a hurricane to go and see for himself first hand what the needs are for multiple communities so that he can have an informed [point of view] to make policy. Why doesn’t he do that? Why doesn’t he go down to Del Rio, Texas and see what’s going on?” Video Below

“First of all, Peter, I think the situation at the border is the result of a broken system,” Psaki claimed, in part.

DOOCY: "Has President Biden ever been to the southern border?"

PSAKI: "In his life? I will have to look back in my history books and check…"

DOOCY: "We have been looking all morning and we cannot find any record of him visiting the border…" pic.twitter.com/snZTsXeksp

(Related: Trump On Report Of ‘20%’ Of Migrants ‘Coming Across Border’ With Covid: “This Is What A Rigged & Corrupt Presidential Election Gets You!”)

Trump On WI Audit: “We Must Demand Our Elected Officials Follow The Law & WE MUST HOLD THEM ACCOUNTABLE”