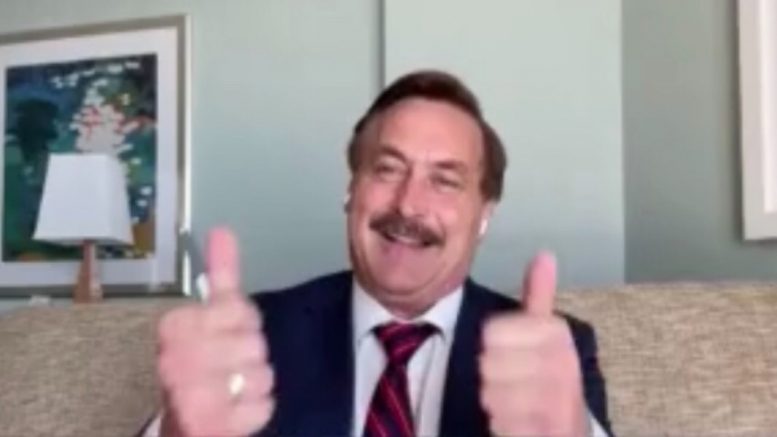 During a Tuesday interview on Real America’s Voice “War Room”, MyPillow CEO Mike Lindell told host Steve Bannon that he “made a promise to this country, with all the evidence I have, that we would get it to the Supreme Court”.

He revealed plans to take his election fraud case to the Supreme Court before Thanksgiving and predicts the nation’s highest court will review his case, which seeks to challenge 78-year-old Joe Biden’s purported victory.

“I predicted that they would vote 9-0 to look at the evidence. Now originally, I had hoped for August and September. That’s why we had the Cyber Symposium — was to spread the word. This was from the 2020 election, because what is our biggest block? The media is our biggest block,” Mike Lindell said.

“After the Cyber Symposium, Steve, which all 50 states were present, the media went completely Fox [News]. Nobody talked to me. They went completely south, okay? They went in their fox holes like Fox News. Shame on you Fox. They cost our country so much. It’s horrible what they’ve done to our country,” he expressed.

“But in spite of Fox everybody, what we’ve done now is I’ve went — took the evidence to these states. … Well guess what? I’ve got news for everybody. Right now I asked all the lawyers just yesterday — we are taking this case to the Supreme Court before Thanksgiving. Now maybe Fox will report that today. You heard it here first. Our case is ready. We’re bringing it to the Supreme Court before Thanksgiving,” the MyPillow CEO announced.

“By the time I’m done, I’m hoping all 50 states are on board, [be]cause we want our country back, and we’re getting it back,” Lindell said. “This evidence is 100% non-subjective evidence, and the Supreme Court — they’re gonna vote 9-0 to take it in”. Continued Below

Lindell told Steve Bannon that he has went around the country to different states since holding the Cyber Symposium last month, talking to attorney generals regarding the data and evidence he has gathered over the 2020 general election. Lindell believes the attorney generals are prepared to take his data gathered to obtain standing at the Supreme Court.

“I’m reporting we will have this before the Supreme Court before Thanksgiving. That’s my promise to the people of this country. We’re all in this together. We’ve worked very hard on this,” he said.

“The reason I didn’t do it back in August and September is because now more and more — it’s the power of numbers. We want all the states on board, because every single state was hacked. Every single state has standing,” Lindell added. Video Below

Lindell reportedly filed the lawsuit alleging widespread voter fraud in the 2020 election over the summer after he released documentaries including “Absolute Proof”, “Scientific Proof”, “Absolute Interference”, “Absolutely 9-0”, and held a “Cyber Symposium” to substantiate his claims. The following documentaries can be viewed at Lindell TV.