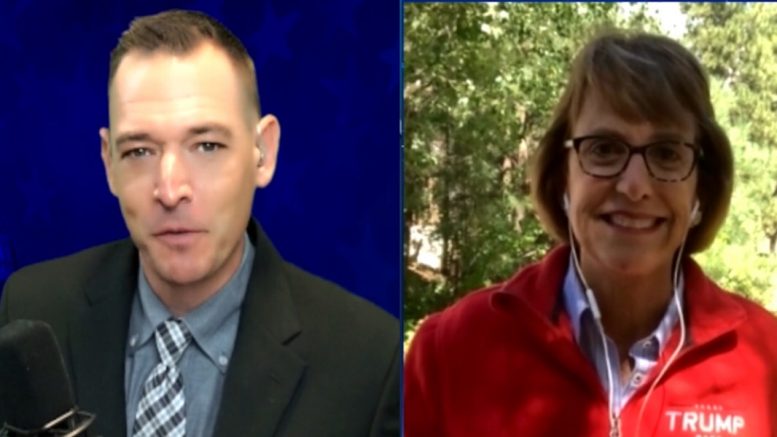 During a Monday interview on “The Stew Peters Show”, State Senator Wendy Rogers (R) reiterated that Maricopa County’s audit results will be released on Friday, September 24 and also confirmed that the routers and splunk logs, used in the 2020 election, will be handed over after months-long obstruction by Maricopa County.

The latest settlement with Maricopa County is an “agreement that … gets us routers, splunk logs”, Senator Rogers told Stew Peters. “We’re very pleased. It’s a win, win,” she expressed.

“It’s late in the game, but we are prevailing, and you can also tell that we prevailed here because of the tweets that were put out by the Maricopa County sheriff and one other Maricopa County official that said, ‘I would have never have gone for this.’ So they know we have what we need,” Senator Rogers said.

“We will, yes, hold the hearing on Friday the 24th. … It will be held on the Senate floor. We’re not doing it in a hearing room, because we have a lot of remodeling going on,” the Arizona state senator confirmed.

Senator Rogers said to the “naysayers” who don’t believe the Arizona Senate will get their hands on the routers and splunk logs: “Look at your own states. Find out who your own legislatures are, and get audits going in your state. We’re doing this more rapidly then 49 other States, come heck or high water. We’ve been upheld in court 4 times.”

“We have done nothing but pursue the truth and tenaciously do that. And so, I submit to all of the folks who are saying ‘Oh, this is a bunch of hooey’; you’re incorrect. We are doing the Lord’s work, and I’m very proud of what we’re doing. I would just beseech you to get behind us and get all these other States going,” she recommended. Continued Below

“Arizona’s got this. We have it in hand. And we’re gonna get this done,” the Arizona State Senator reassured.

“What is the process? A constitutional crisis? Are we looking at a decertification of the election? Then what happens? What’s the legal structure that’s in place to deal with this?” Peters asked the retired USAF Lt colonel, referring to the Senate report — should it potentially reveal massive voter fraud.

“It’s really a one day at a time proposition. Ideally, we’ll vote to decertify as Arizona legislatures. And hopefully, Georgia will do the same. And Wisconsin … Pennsylvania. Yes, I am in touch with those legislatures in those states to try to encourage them, to come alongside them, to move that football down the field. … We will move forward. We will move as state legislatures,” Senator Rogers said. Video Below

“And the ones who are weak, state legislature wise, who don’t sign on, to discredit, will feel the wrath of their constituents, because this is the time to rise up. This is the time to show a backbone and show what it meant when you took the oath of office to support and defend the United States Constitution. It is the U.S. Constitution that has endowed us, state legislatures, with the plenary power to oversee the U.S. presidential election,” she explained.

“I take that very seriously and do other conservative state legislatures around the country with whom I’m in contact. So just hang on, because everyday will be new. And we have to keep all of this in the news. Okay? You cannot let Yahoo and Buzzfeed and all these news sources command the narrative,” Rogers said. “We must command the narrative. There are more of us than there are of them.”

There are people telling me "Don't say decertify, you will lose support". I say – if we certified incorrectly we MUST #Decertify. It is our duty. Justice demands it. Our country demands it. Look at what's happening to our country because we falsely certified the results! #AZAudit

Rogers has also endorsed candidates for 2022 who are for election integrity and for America First: