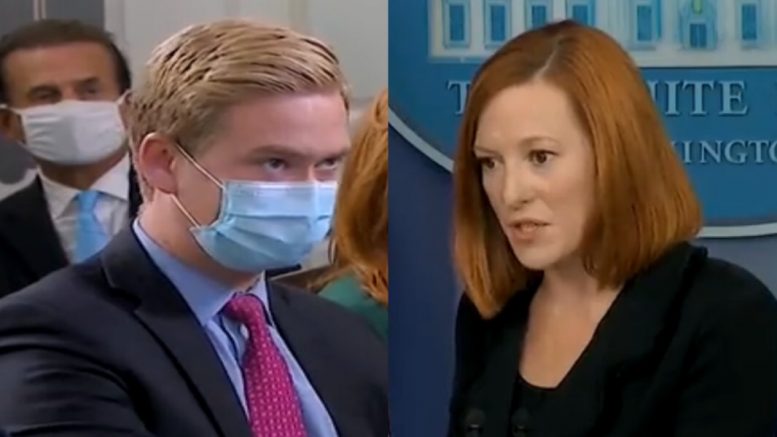 White House Press Secretary Jen Psaki, on Monday, was grilled over whether illegal aliens crossing the U.S. southern border are being asked “for proof of vaccination, or a negative COVID test”, prompting Psaki to claim, in part, “It’s not the same thing. … They’re not intending to stay here for an extended period of time.”

The Biden administration, however, will require all international travelers coming into the United States to be fully vaccinated and tested for Covid-19 under a new system that will open up air travel to vaccinated foreign nationals from dozens of countries for the first time since the early days of the pandemic. Starting in early November, foreign nationals will be allowed to fly into the U.S. if they are fully vaccinated and able to show proof of vaccination prior to boarding a U.S.-bound flight, White House Covid coordinator Jeffrey Zients said, NBC News reported on Monday.

“Is somebody asking the foreign nationals who are walking into Del Rio, Texas and setting up camps on this side of the border for proof of vaccination or a negative COVID test?” Fox News’ White House correspondent Peter Doocy asked.

Psaki alleged that people who cross the border are “assessed” for the Chinese virus and then, they are supposed to be quarantined, if they appear to be positive for the virus.

“Well, let me explain to you again, Peter, how our process works. As individuals come across the border and they are both assessed for whether they have any symptoms. If they have symptoms, they are — the intention is for them to be quarantined. That is our process. They are not intending to stay here for a lengthy period of time,” Psaki claimed without providing evidence. Continued Below

“It’s not the same thing,” she then alleged.

“But they are here!” Doocy fired back. “What’s the difference?”

The press secretary claimed that the administration is using Title 42 and other policies to expel migrants because they don’t want a COVID outbreak from the large uptick in illegal aliens coming into the United States. Video Below

Doocy also wondered where is Kamala Harris, who was tapped by Joe Biden to address the “root causes” of the administration’s border crisis.

“She has been addressing the root causes of migration by working with countries in the region to ensure they have the assistance they need to reduce the number of people who are coming and trying to make those journeys across the border. We’ve actually seen some reductions in some of those numbers,” Psaki claimed. “That doesn’t change the fact that this is a very challenging situation in Del Rio.”

DOOCY: "Is somebody asking the foreign nationals who are walking into Del Rio, Texas and setting up camps on this side of the border for ‘proof of Vaccination’ or a negative COVID test?" pic.twitter.com/LLfaKTW02R

“Why is that you’re trying to require anybody with a job or anybody that goes to schools get a COVID-19 vaccine, but you’re not requiring that of migrants who continue walking across the southern border, coming into the country?” Peter Doocy pressed Jen Psaki. “It’s a requirement for people at a business with more than 100 people, but it’s not a requirement for migrants at the southern border. Why?”

(Related: Trump Issues A Statement On Haitian Migrant Surge In Del Rio, TX: “This Is Not Just A Border Crisis, This Is A Crisis Crisis”)

WATCH: Al Sharpton Gets Shouted Down By Protestors In Del Rio: “We Don’t Want Your Racism In Texas. Get Out Of Here!”