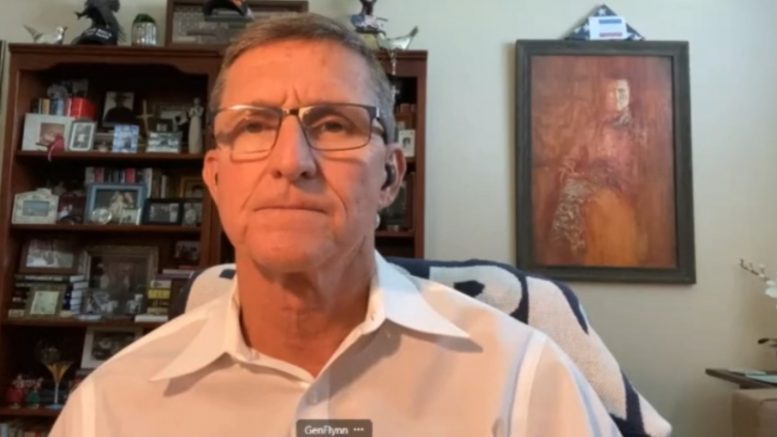 Former U.S. Army Lieutenant General Michael Flynn hinted at the prospects of making a return back to government on Saturday.

Flynn — who served as director of the Defense Intelligence Agency under President Obama and NSA Director under President Trump — gave the indication while reacting to the surge of migrants that have been filmed crossing the Rio Grande between Texas and Mexico.

Del Rio’s mayor declared an emergency on Friday, as it is estimated that over 12,000 migrants are currently crowded under or near the international bridge connecting Del Rio and Ciudad Acuña, while thousands more are expected to arrive.

BREAKING: I am absolutely stunned by what I’m witnessing right now. We are on a boat in the Rio Grande near the Del Rio international bridge and we are watching as masses of hundreds of migrants walk across the river from Mexico and stream into the US illegally. @FoxNews pic.twitter.com/xXE4pDkpIe

“Napoleon would be impressed with this ‘River Crossing,’” Michael Flynn wrote on his Telegram account. “Read up on the crossing of the Elbe by the French (a people I have a lot of time for—the people not the government have a fire in their belly and it will ignite).”

“There is no way that the majority of people or the electoral college put the current occupant of the WH into the WH…NO WAY!!!” he continued. “Why would we EVER want this ongoing nonsense in any of our American neighborhoods? We would not.”

“I am so fired up to do even more. In fact, I hope the government is still worried about me because maybe, just maybe, I’ll be back in government…like my Mom used to say, “woe be tied you!” Flynn concluded.

In 2020, the Justice Department dropped their charges against Flynn that alleged he lied to the FBI over communications he had with Russian ambassador Sergey Kislyak. The conversation with the ambassador led to Flynn’s resignation after serving only 22 days as NSA Director, on grounds that he misled then Vice President Mike Pence about what was communicated.

45th President Trump later pardoned Flynn near the end of his term, as Flynn’s case remained locked up in court despite the DOJ “exonerating” him. Flynn remains a close ally to the former president.