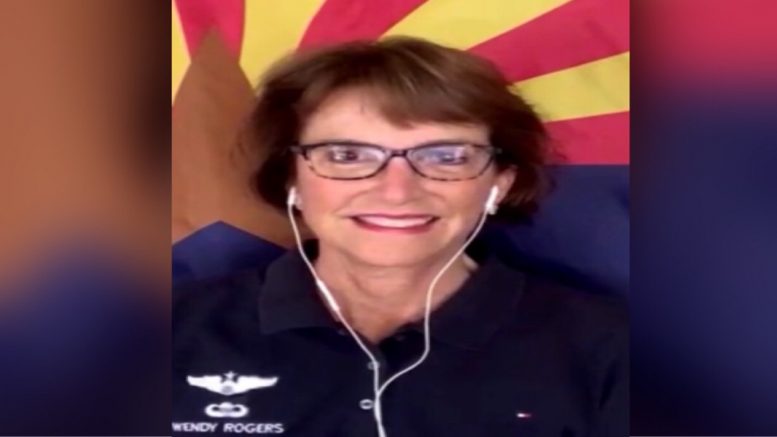 The firm, Cyber Ninjas, was expected to turn over their full draft report to the Arizona Senate last month over the full forensic audit of the 2020 general election in Maricopa County; however, the process was delayed after three members of the company involved in the effort tested positive for COVID-19.

“The date to release the audit results is next Friday Sept 24th at 1 pm on the Senate floor. Because we have no hearing rooms it will be presented to Chairman Petersen and Senate President Fann. Gallery will be open to public,” retired Airforce Lt. Col. Wendy Rogers tweeted on Thursday.

The date to release the audit results is next Friday Sept 24th at 1 pm on the Senate floor.  Because we have no hearing rooms it will be presented to Chairman Petersen and Senate President Fann. Gallery will be open to public.

Most recently, Liz Harris, a Republican grassroots organizer, disclosed voting discrepancies in Maricopa County, which was conducted through canvasing. She released a report of the audit, as previously reported by The Freedom Times.

“Additionally an estimated 96,389 mail-in votes were cast under the names of registered voters who were either unknown to the residents of the registration address or who were verified as having moved away prior to October 2020”, the report states. Continued Below

State Senator Rogers has indicated the canvas report could likely be used, in part, with the Senate’s findings.

During a Senate hearing in July, it was reported: 3,981 voted, despite being registered after the October 15 deadline. 11,326 voted, who were not on the voter rolls on November 7th, but were on the roll on December 4. 18,000 voted and then were removed from rolls after the election. And there were 74,243 mail-in ballots with no evidence of ever being sent.

Additionally, the Maricopa County election system was breached in November, which the county privately notified voters, but reportedly kept it from the public.

Last month, Arizona Attorney General Mark Brnovich (R) announced that his office (AGO) determined the Maricopa County Board of Supervisors (MCBOS) is in violation of state law for failing to comply with the Arizona Senate’s legislative subpoena related to the 2020 election audit, as previously reported by The Freedom Times.

Arizona Senate President Karen Fann (R) had sought ballot envelopes or ballot envelope images; user names, passwords, and security keys for election machines; voter records; routers or router images; and splunk logs. The board was also told to appear at the Arizona State Capitol for a hearing on August 2 but failed to appear, as also previously reported by The Freedom Times. Continued Below

State Senator Wendy Rogers confirmed in another post that the forensic audit results for Maricopa County will, in fact, be published.

Mrs. Rogers also posted pictures from an Arizona Audit volunteer reunion, on Wednesday writing, “Patriots, everyone of them — real people who did the Lord’s work.”

Here are some photos from the #AZAudit volunteer reunion last night. Wonderful time. For those saying the audit is "fake" and "not real" and "nothing is going to happen" – take a look at these audit volunteers. Patriots, everyone of them – real people who did the Lord's work. pic.twitter.com/6W7RHqkUAk

She followed up with another post, blasting the “mocking bird media”, who she believes sent out a “Soros memo” that “went out to all the paid fake news to attack the volunteer audit reunion”.

Looks like a #SorosMemo went out to all of the paid #FakeNews to attack the volunteer audit reunion last night. Never trust the #MockingbirdMedia. These geniuses don’t realize that the counting portion done by the volunteers is done. These people are enemies of the Republic.