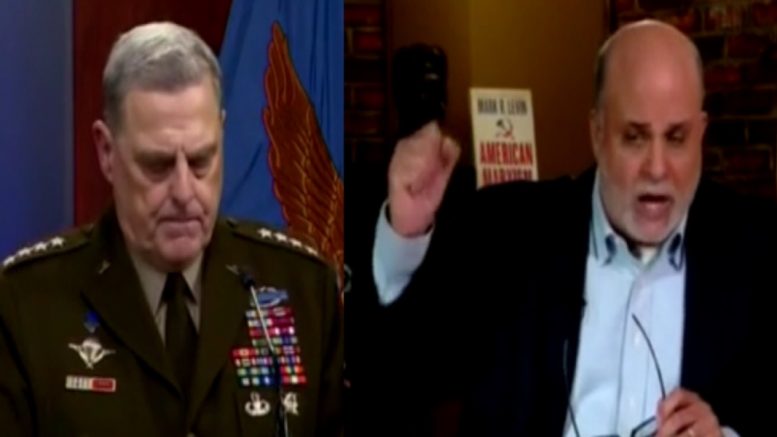 During Tuesday’s night airing of Fox News’ “Hannity”, Mark Levin reacted to a story regarding Chairman of the Joint Chiefs of Staff General Mark Milley, who reportedly made two phone calls to Chinese officials in fear that former President Donald J. Trump would create conflict with the communist nation — according to a book authored by Washington Post associate editor Bob Woodward and national political reporter Robert Costa.

Mark Levin said that if Woodward and Costa’s allegations about General Mark Milley are true, Milley should be fired and they should be ashamed as reporters for sitting on a story “for months and months” that may have prevented further U.S. military catastrophe in Afghanistan.

He asserted that Woodward is likely hoping to make “millions of dollars” off of the book and score news appearances to boost his profile, while attempting to “trash Trump”.

“People should boycott this book: people should not reward these people at all for their conduct as so-called journalists. Journalism is corrupt and dead in this country,” Levin expressed. Continued Below

Levin also questioned Costa’s qualifications as a journalist, given that the book was reportedly based on interviews with over 200 people, based on the condition they are not named as sources. “Who the hell writes a book with 200 anonymous sources?” he wondered. “[They] have the tapes and the notes. But we don’t: the American people, this is our country. Don’t we get to make a judgment about these things?”

“What kind of a news organization is this?” he said of The Washington Post, owned by Jeff Bezos. “And if this happened, it’s big news. I’ve spent my life defending the Constitution of the United States. You have here Mark Milley, not once, but twice, before the election and after — contacts the head of the Communist military in China — our number one enemy.”

“So [Milley] calls China around the back of the Commander in Chief and tells them ‘Don’t worry about him? I have him under control’, pretty much? And then, after the election he says, ‘Gen. Li, you and I have known each other for now five years. If we’re going to attack, I’m going to call you ahead of time'”, Levin said, quoting Milley’s reported conversation. Continued Below

“If the United States military is going to attack China, the head of the Joint Chiefs of Staff knows every step of it. He is going to tell the enemy? If that’s true, this S-O-B needs to be out of there as fast as possible without a debate,” Mark Levin urged.

“What else does he do? According to this article, if it’s true, he tells his subordinate officers to basically take an oath of loyalty to him. To him. What else does he do? He conspires with the [then]-head of the CIA [Gina Haspel], who is worried about a right-wing coup,” Levin added.

“… And the two reporters of the story sit on this for months and months and months so they can make a buck on a book. Wouldn’t it have been good to know about Milley before what happened in Afghanistan, so his ass could’ve been kicked out office?” Levin asked.

(Related: Trump Blasts The Story On ‘Dumbass’ General Milley & The Two Authors Who Wrote It)