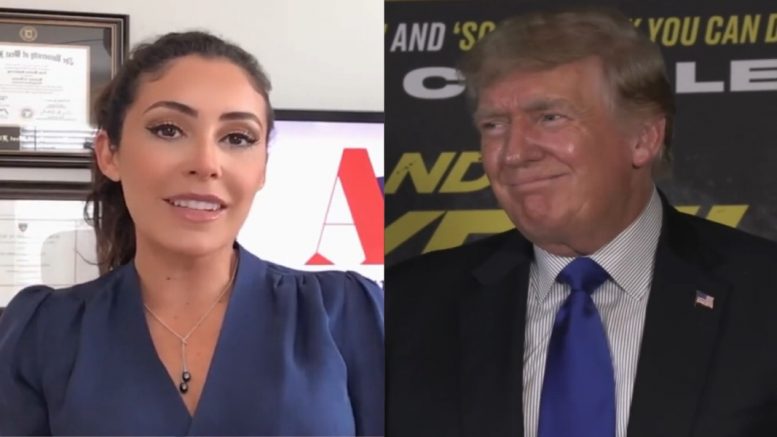 45th President Donald J. Trump issued a statement on Tuesday via email from his “Save America” PAC, announcing his “complete and total endorsement” for Anna Paulina Luna who is running for Florida’s 13th Congressional District.

The former President’s endorsement of Luna comes as a jab to fellow Republican and previous opponent Amanda Makki, who dove headfirst into Trump territory and heightened conservative rhetoric at her campaign kick-off in July ⁠— a shift from her previous approach as a more moderate conservative who supported Trump, Florida Politics reported.

The race, which is one of the most hotly contested districts on the 2022 ballot, also has three Democratic challengers — state Reps. Ben Diamond and Michele Rayner-Goolsby, and Eric Lynn, a former national security adviser in former President Barack Obama’s administration, per Florida Politics.

In a Tuesday statement, the 45th President said of Anna Paulina Luna:

Anna Paulina Luna is a great fighter who is running for Congress in Florida. She is an Air Force veteran who puts America First, unlike her RINO opponents. Anna is committed to strong borders, serving our Veterans, and ensuring Florida’s beautiful coastlines are protected.

This is an important race because it is “key” to taking back the House. Anna is a warrior, she is a winner, and it’s time for all America First Republicans to unite behind her strong campaign. Anna has my complete and total endorsement. Continued Below

It is with great honor that I would like to announce that I have been endorsed for Congress by the greatest President of our time, the 45th (and next) President of the United States, Donald J. Trump. pic.twitter.com/TsBV0O4B5g

Luna is a veteran of the U.S. Air Force and conservative media personality. Republicans nominated her for the same House seat in 2020, which she eventually lost to Rep. Charlie Crist, a St. Petersburg Democrat. She had considerable backing from Trump’s orbit in that race as well, including from Rep. Matt Gaetz, R-Fort Walton Beach, and the former president’s son, Donald Trump Jr., Tampa Bay Times reported.

Rep. Jordan On Biden Admin Considering Paying Millions To Illegal Immigrant Families: “One Of The Many Stupid Policies From This Administration”