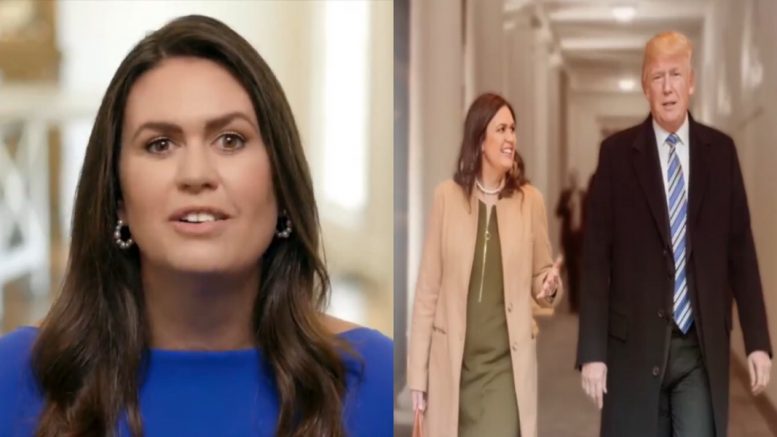 The Little Rock Nine, nine Black students who enrolled at Little Rock Central High in 1957, were prevented from entering the then-segregated school by then-Arkansas Gov. Orval Faubus, The Hill reported.

“I’ll never forget being a student at Little Rock Central High and watching my dad, a Republican governor, and Bill Clinton, a Democrat president, hold open the doors for the Little Rock Nine, doors that 40 years earlier had been closed to them because they’re Black,” Sarah Huckabee Sanders said.

“Good triumphed over evil,” she expressed. “That’s is who we are.”

“The radical left wants to teach our kids America is a racist and evil country, but Arkansans are generous, hard-working people,” she said. “I was born and raised here. This is where we chose to raise our family, and I want the same for my three kids as yours; a better life, here in Arkansas.”

“We don’t want our kids living under socialism, cancel culture, and big government taking away our freedom. As governor, I will defend our freedom and champion good schools, higher paying jobs, and a better life for all,” the former White House press secretary vowed. Continued Below

Watch my first TV ad – "Who We Are" – launching tomorrow ⬇️ pic.twitter.com/l7Dh6PJ2Aj

The minute-long ad is set to debut on Saturday during the Arkansas vs. Texas football game.

Huckabee Sanders, who served as White House press secretary under former President Trump, is running against Arkansas Attorney General Leslie Rutledge in the state’s Republican gubernatorial primary. Her campaign said in July she has raised $9 million since announcing her candidacy,” The Hill reported.

Former President Trump endorsed Sanders’ bid for governor of Arkansas in January after she announced she was running for the position that was once held by her father Mike Huckabee, who served for ten years as governor in the Natural State.

Sarah Huckabee Sanders is a warrior who will always fight for the people of Arkansas and do what is right, not what is politically correct. Sarah is strong on Borders, tough on Crime, and fully supports the Second Amendment and our great law enforcement officers.

She loves our Military and Veterans — and her home state of Arkansas. Sarah will be a GREAT Governor, and she has my Complete and Total Endorsement.