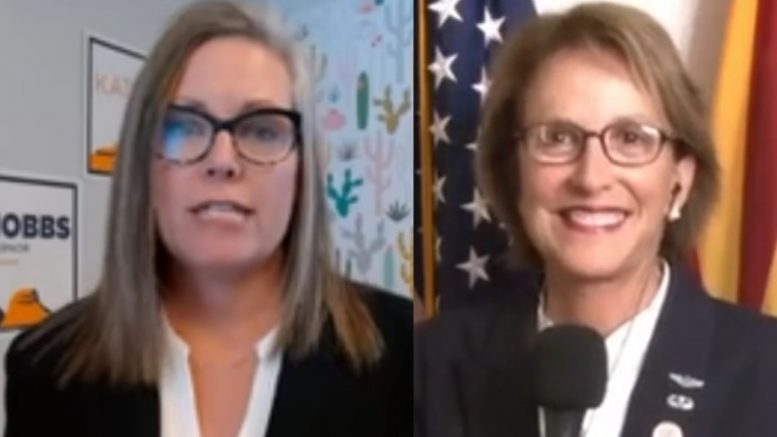 Arizona Secretary of State Katie Hobbs is troubled by a new article that claims all Republican gubernatorial candidates in the Grand Canyon State have not acknowledged that Joe Biden won Arizona in the 2020 election.

On Tuesday, Hobbs — who is running as a Democrat in Arizona’s governor race — tweeted the following quote from an opinion piece written by AZ Central’s Laurie Roberts: “Of the five Republicans running for governor, not even one of them will acknowledge that Joe Biden won Arizona last year.”

"Of the five Republicans running for governor, not even one of them will acknowledge that Joe Biden won Arizona last year." https://t.co/xX4FhPeDY7

Related Article: AZ Sec. Of State Admits She’s Working With Other State Leaders To ‘Make Sure’ Audits Like AZ ‘Doesn’t Happen In Their States’

In response, Arizona state Senator Wendy Rogers tweeted, “Does someone want to tell her?” along with the hashtags: #RecallTheElectors, #DecertifyNow, #ArrestThem.

Since initial findings of the Maricopa County full forensic audit were made public during a Senate hearing, Sen. Rogers has been pushing for Arizona’s election results that show Joe Biden winning the state to be decertified, and is now calling on other states to conduct audits of their own.

Some of the initial suspicious discoveries that were revealed by Arizona auditors are as follows: