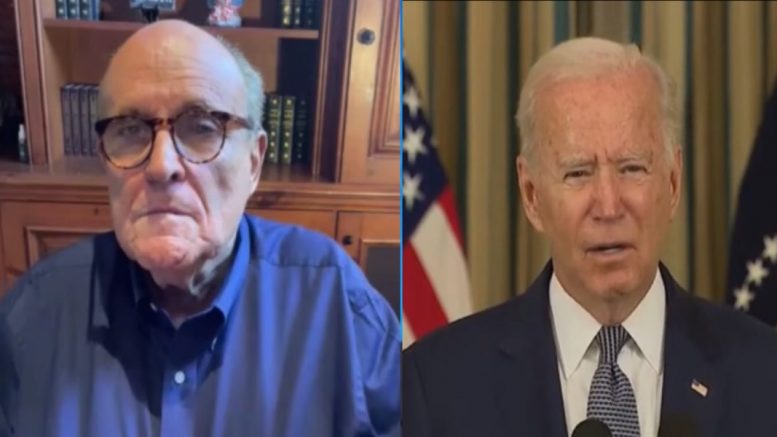 Giuliani’s assessment comes as billions of dollars of U.S. weapons fell into the hands of the Taliban after the collapse of the Afghan government and President Ashraf Ghani fleeing the country.

Rep. Jim Banks (R-IN) warned last month that “due to the negligence of this administration,” the Taliban possess more than $85 billion worth of U.S. military equipment including 75,000 vehicles, more than 200 airplanes and helicopters, and more than 600,000 small arms and light weapons.

“The Taliban now has more Black Hawk helicopters than 85 percent of the countries in the world,” Banks said.

In addition to weaponry and other heavy machinery, the Indiana congressman said the Taliban also has access to tools such as night-vision goggles, body armor, medical supplies, and biometric devices containing fingerprints, scans, and other biographical information of the United States’ Afghan allies.

During a Monday interview on “War Room”, Rudy Giuliani told Steve Bannon, “I would say there’s certainly a case to be made and a case to be investigated.” Continued Below

“If this were a Republican president and a Democrat congress, they would have begun an investigation for impeachment the day after it happened. … And it would be probably the most substantial one they’ve ever begun, because technically, he’s violated the constitutional provision,” Giuliana said.

“First of all, it requires you being at war. He did it, while he claims, we’re at war with the Taliban. The war wasn’t over until we left. While we were at war, we gave them an airbase filled with billions of dollars of armaments. We gave them a list of our people and then also the Afghanis who helped us. That’s a kill list. It’s like giving it to the Nazis. … You can’t aid an enemy of the United States,” he explained.

Bannon responded: “You’re saying he aided and abetted our enemies, and you’re saying it’s at least worthy of an investigation, a deep investigation on a number of charges? … You warned the American people about the politicization and weaponization of the impeachment process. … You warned us about weaponizing the impeachment process just like this. How would you weigh and measure that — you’re warning about the weaponization and politicization of it, versus your charges against Joe Biden today for investigation?” Continued Below

“I would rather not have an impeachment, however, I think we’re dealing with a situation that just because the Democrats misused it, we can’t be denied the use of it when something is seriously harmful to the United States. Maybe even more serious is he should be removed under the 25th Amendment,” Giuliani said.

“I think you have to do it. This is serious enough. An American president, who — maybe he’s doing it because he’s mentally incompetent, but we don’t know that — and then, he can defend himself that way. But the reality is, you can’t let an American president give away billions of dollars in dangerous armaments to a mortal enemy of the United States without taking note of it and doing something about it,” he added.

Meanwhile, national security adviser Jake Sullivan said shortly after the collapse of Afghanistan, “We don’t have a complete picture, obviously, of where every article of defense materials has gone, but certainly, a fair amount of it has fallen into the hands of the Taliban.”

National Security Advisor Jake Sullivan on the Taliban’s seizure of billions of dollars worth of military equipment: "The Defense Department has been working to account for all of the defense articles that… may have fallen into the hands of the Taliban." pic.twitter.com/aClAnew2XJ

“We obviously don’t want to see our equipment in the hands of those who would act against our interests, or the interests of the Afghan people,” Pentagon spokesman John Kirby had said at a press briefing.

(Related: Rep. Boebert: “Impeach Biden, Kamala Harris & Throw In The Secretary Of State…Take A Vote To Vacate The Chair To Get Nancy Pelosi The Heck Out Of Here”)