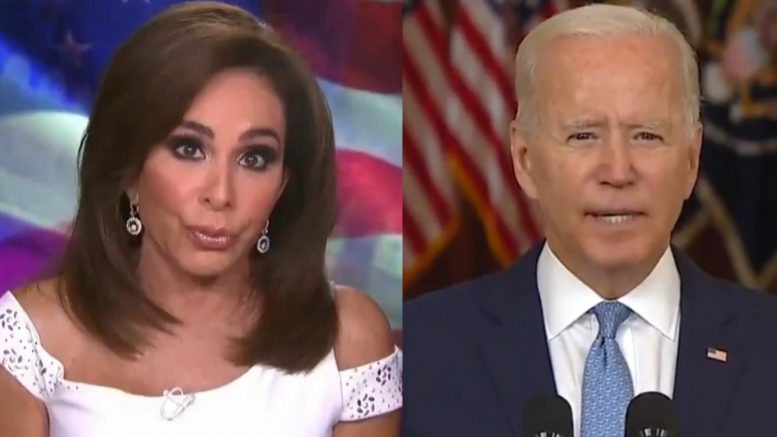 “You’ve been lying for months about Afghanistan, about your exit non-strategy, about your non-decisions, about what your military chiefs told you or not told you,” Jeanine declared as she looked into the camera. “It’s all lies and dangerous ones of that.”

Related Article: Judge Jeanine Unloads On Biden: ‘You Should Not Only Be Impeached – You Should Be Court Martialed’

She continued, “You are no longer the Commander-in-Chief, you are the Liar-in-Chief. You spill lies as truth and then turn and bobble away, incapable of answering questions. Instead, you send your puppets on the street to take fake umbrage and double down on your lies.”

“Joe, your behavior is not only a dereliction of duty and your sworn oath to protect and defend the Constitution and the people of the United States. You have aided and abetted the enemy that we fought for twenty years with American blood and treasure,” said Jeanine before rolling video clips to back up her claims.

Judge slams President Biden as “Liar-in-Chief” amid the fallout of his chaotic & deadly Afghanistan exit pic.twitter.com/VGpkhqraNQ