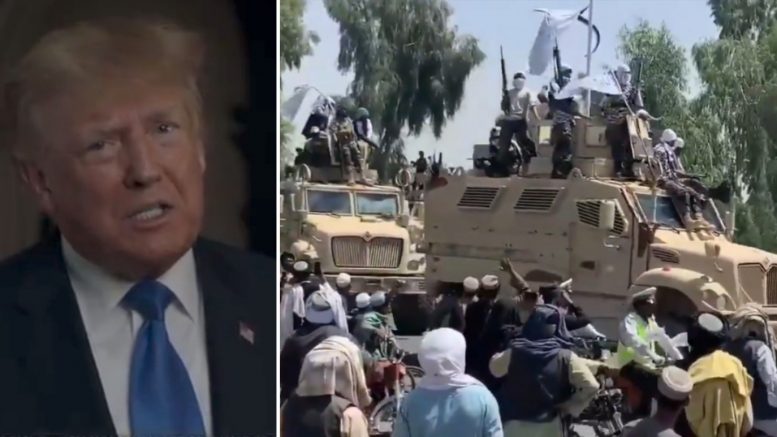 A video circulating on social media appears to show members of the Taliban holding a parade with military equipment that was left behind when American troops withdrew from the Central Asian country.

“The Taliban are holding military parades with the equipment that Joe Biden left them,” former Nevada GOP Chair Amy Tarkanian captioned the video.

The Taliban are holding military parades with the equipment that Joe Biden left them. pic.twitter.com/uztEygniVl

In response to the video, 45th President Donald Donald Trump called out the Biden Administration for claiming just days prior that much the military equipment left in Afghanistan has been “demilitarized” or disabled.

“There is nothing disabled about the equipment that the United States gave to the Taliban. Just more made up lies!” Trump wrote in an email to his supporters later on Tuesday.

Here is some more footage showing functional military equipment that was left in the hands of the Taliban and flaunted during the parade:

Taliban victory parade in Kandahar Afghanistan- brought to you by @JoeBiden and funded by American taxpayer dollars! 🤬pic.twitter.com/MAksPrl9yM

🇺🇲⚡🇦🇫A huge number of armored vehicles left behind by the Taliban by US and Afghan forces in Kandahar this afternoon.
The Taliban held a victory parade over the United States in the city.
#Afghanistan #USA pic.twitter.com/XpR4ufFnOx

The victory parade of 🏳️ Taliban over the 🇺🇸 #UnitedStates took place today in #Kandahar, #Afghanistan

The #Taliban also showed off the US armored vehicles Maxx Pro and UH-60 Black Hawk helicopters they received as a bonus. pic.twitter.com/3cNuon54Dl

While Making Climate Change Remarks, Biden Gets Video-Bombed By A Large Bug Crawling On Him