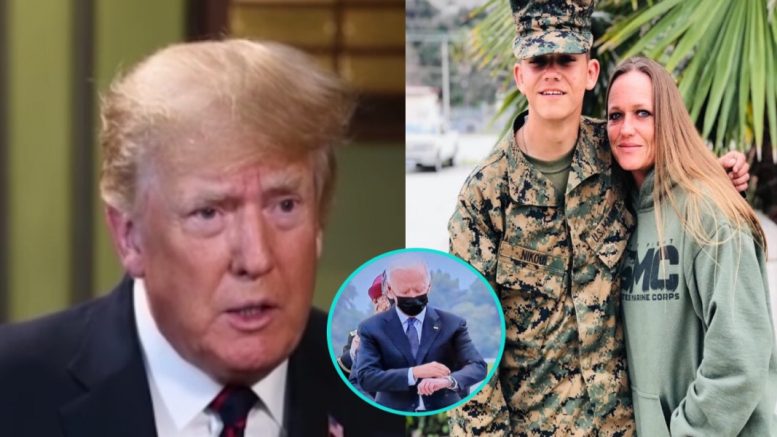 45th President Donald J. Trump issued a statement via email from his “Save America” PAC on Tuesday supporting Shana Chappell, the mother of U.S. Marine Kareem Nikoui, who was killed in the deadly terrorist attack in Afghanistan under the Biden administration.

Chappell ripped 78-year-old Joe Biden in a social media post for his response to the families of the fallen Marines.

In a social media post, Chappell called out Biden for “disrespect,” describing that Biden repeatedly checked his watch as the bodies of the victims of the deadly explosion were carried off a plane.

“After I lay my son to rest you will be seeing me again!” Chappell said in a post in which Biden was tagged. “Remember I am the one who stood five inches from your face and was letting you know I would never get to hug my son again, hear his laugh and then you tried to interrupt me and give me your own sob story.”

According to Chappell, after Biden interrupted her, he rolled his eyes and threw his hand up as he walked away. Continued Below

Shana, you are 100% correct. If I were President, your wonderful and beautiful son Kareem would be with you now, and so would the sons and daughters of others, including all of those who died in the vicious Kabul airport attack.

Civilians should have been brought out first, along with our $85 billion of equipment, with the Military coming out very safely after all was clear. I love you, and I love Kareem. Continued Below 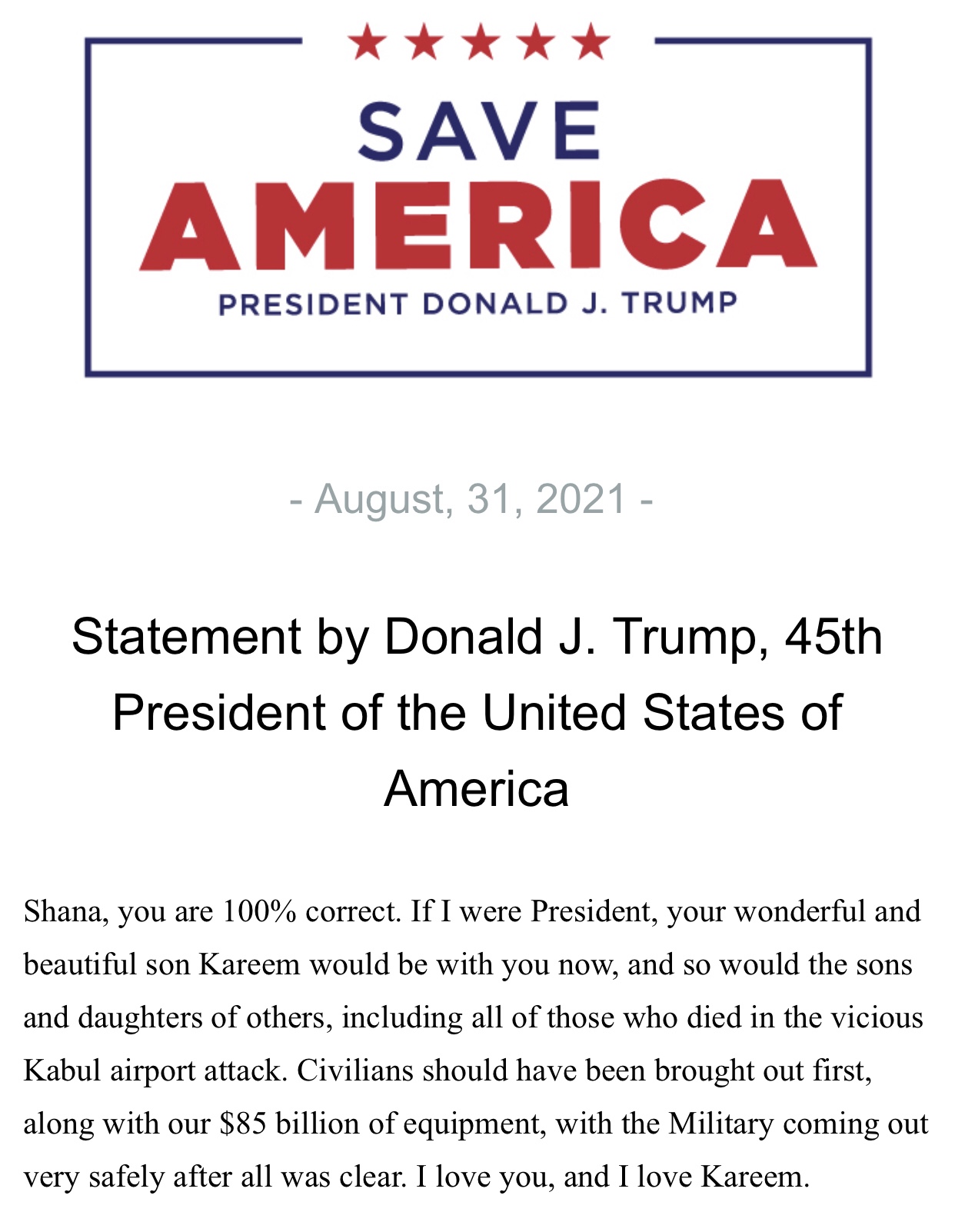 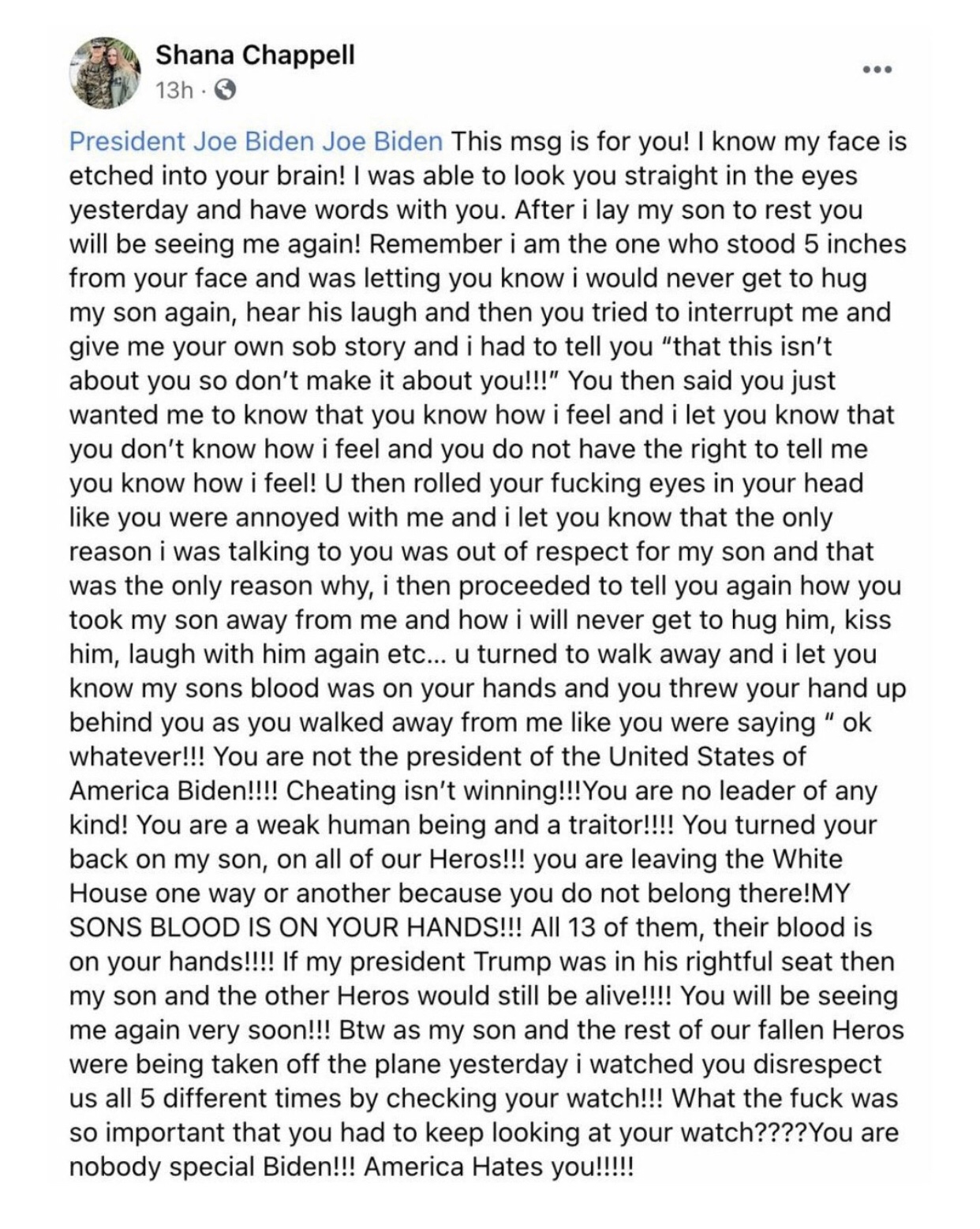 Facebook issued an apology on Tuesday for mistakenly deleting the Instagram account of the mother of a Marine who was killed in last week’s airport attack in Kabul, Afghanistan after she posted several sharp criticisms against Joe Biden.

Shana Chappell, the mother of 20-year-old Marine Corps Lance Corporal Kareem Nikoui, had her account “incorrectly” removed from the Facebook-owned social media platform last week after she made multiple posts blaming Biden for her son’s death.

In a statement given to Newsweek, a Facebook spokesperson said Tuesday that the account has since been restored.

“We express our deepest condolences to Ms. Chappell and her family. Her tribute to her heroic son does not violate any of our policies. While the post was not removed, her account was incorrectly deleted and we have since restored it,” the company said in a statement Tuesday.