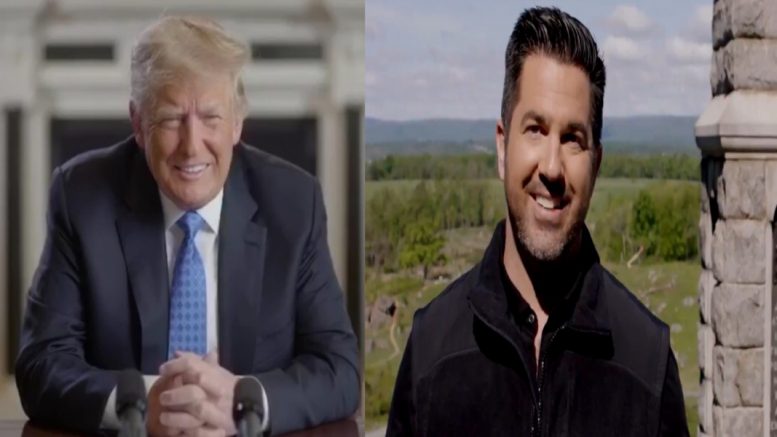 45th President Donald J. Trump issued a statement via email from “Save America” PAC Wednesday announcing his “Complete and Total Endorsement” for Sean Parnell who “is running for the United States Senate to serve the Great Commonwealth of Pennsylvania”.

The race to succeed retiring Republican Sen. Pat Toomey is seen as one of the most competitive in the country. It will help determine control of the Senate after the midterm elections and the future of Joe Biden’s agenda, The Philadelphia Inquirer reported.

Sean Parnell is running for the United States Senate to serve the Great Commonwealth of Pennsylvania.

Sean bravely fought for our Country as a Captain in the U.S. Army and was awarded two Bronze Stars (one for valor!) and the Purple Heart. Unlike our current administration, he never left anyone behind. Sean is a great candidate, who got robbed in his congressional run in the Crime of the Century—the 2020 Presidential Election Scam.

He will make Pennsylvania very proud and will fight for Election Integrity, Strong Borders, our Second Amendment, Energy Jobs, and so much more. Sean Parnell will always put America First. He has my Complete and Total Endorsement! Continued Below

Sean Parnell reacted Wednesday to the 45th President’s endorsement, expressing on Twitter, “So proud to be endorsed for US Senate in Pennsylvania by President Trump! In the Senate I’ll always fight for our America First agenda and will never back down to the radical left. Now let’s go Win Pennsylvania and Save America!”

Join #ParnellsPlatoon, get in the trenches and support our campaign here! 🇺🇸https://t.co/KhvrsFZKaR

In May, Sean Parnell released a campaign video announcing his run for Senate.

It’s official: I’m running for Senate here in Pennsylvania to take back the majority and stand up for America. If you believe the greatness of America is worth fighting for, join the Platoon & donate today! Together we will save the American experiment 🇺🇸 https://t.co/p5HqLd8RYM pic.twitter.com/tWkEgyWxHp

Sean Parnell retired a highly decorated Captain and was awarded two Bronze Stars, one for Valor and the Purple Heart, according to his Senate campaign website.