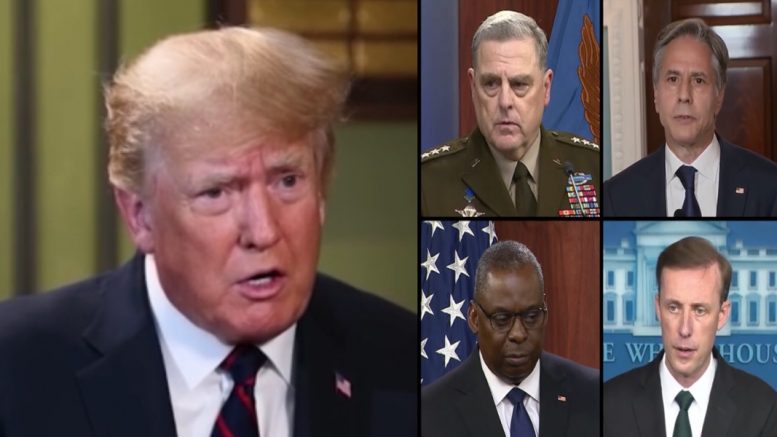 “They cease because the United States has totally lost control. People are bombing them. They’re sending rockets into them. They’re killing a lot of people — 200 people two days ago, which we had 13 Marines at least, because you have a lot of very badly wounded Marines and Navy right now,” Trump said.

“This is the greatest humiliation in the history of our country, in my opinion This is a psychological humiliation and a military humiliation,” the former president said.

“And when Biden said he’s taking out the military before he takes out the people or the equipment, I said, ‘That’s can’t be possible’. I figured the press got it wrong, because they get so much wrong. And they didn’t get it wrong. He took out the military, lost total control. We had total control. In fact, in his speech — I’m sure they were thrill when he said it, but he made a mistake probably. But it was true. Not one solider was killed for 18 months under me, because they understood that if they killed any of the American soldiers, any American period, anybody gets killed, we go after them like I did many times,” he explained.

Trump was referring to Joe Biden’s exchange with Fox News’ Peter Doocy last week over the 13 fallen Marines, in which Biden confirmed that soldiers were not killed in combat in Afghanistan under the Trump administration’s negotiations.

The former president told OANN’s Dan Ball that he had previously spoken with Taliban leader and warned, “You will be met as hard or harder than any country has ever been met with force before”, adding, “And I said, ‘You understand that?’ And he understood that. And I said, ‘It will start with your house. That’s where’s it’s starting.’ And it was fine. Nothing was happening.” Continued Below

Asked why the Biden administration disregarded the conditions set by the Trump administration against the Taliban, Trump said, “Because they’re weak and stupid. It’s very simple. I bombed them a lot during this agreement because they didn’t meet a certain condition.”

“And they were verbal, as well as otherwise. But he understood that. You never saw problems when I was president with them. There was no problem. They weren’t taking over the country. They were very good,” Trump explained. Continued Below

“The single greatest humiliation we’ve ever had was the withdrawal from Afghanistan. We could’ve had a beautiful withdrawal. We could’ve gone out with victory. We would’ve taken all the civilians out, all the Americans out, take other people if we determine they’re worthy. … A lot of those people [the Biden administration] took out are terrorists. They were hopping on those planes because they’re very smart, they’re very sharp, and they know how to get on a plane better than a regular person that needs protection,” Trump said.

“We have terrorists being delivered all over the world from Afghanistan, and you’ll see things happening over the years to come that is disgraceful,” he predicted.

“So we have this plan, strong conditions. They didn’t meet a couple of them. We hit them very hard. There was no way, Dan, that ever in a million years they were going to do anything to us. So we were getting our civilians out. We could take our time; if it took us two years or one year, there was no date that mattered. I set a May 1st date, but there was no date. One of the reasons I wanted to have it longer is because they weren’t meeting all of the conditions. We hit them very hard,” Trump added. Video Below

(Related: ‘Bomb The Hell Out Of It’: Trump Urges, If Military ‘Equipment’ In Afghanistan Is ‘Not Handed Back’ To U.S.)