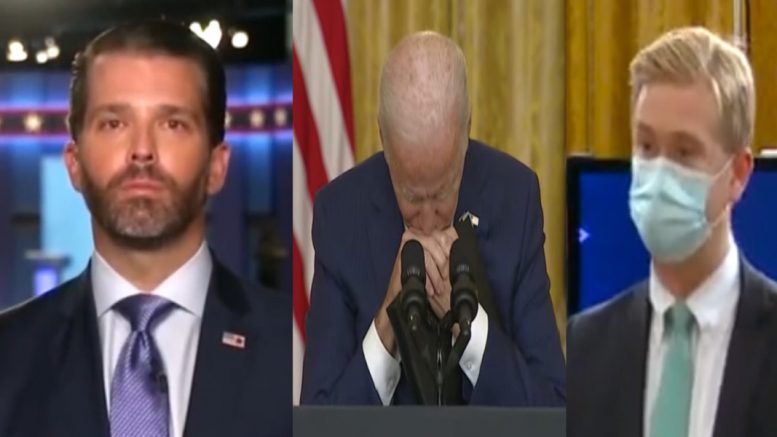 A suicide bomb attack Thursday outside the Abbey Gate at Kabul’s airport in Afghanistan killed 12 U.S. service members and injured at least a dozen more, U.S. officials said. Those that were killed included 11 Marines and a Navy corpsman. Meanwhile, the Pentagon said that 15 more had been injured in the attack, according to Fox News.

The Pentagon confirmed the initial explosion as well as a second attack at the Baron Hotel, where Americans have gathered in the past for rescue and evacuation. Marine Corps Gen. Kenneth McKenzie Jr. said that two suicide bombers were assessed to be ISIS fighters, per Fox News.

78-year-old Joe Biden, during a news conference on Thursday, was pressed by Fox News’ White House correspondent Peter Doocy, over the 12 Marines killed in Afghanistan on his watch.

“Mr. President, there have not been a U.S. service member killed in combat in Afghanistan since February of 2020. You set a deadline. You pulled troops out. You sent troops back in, and now, 12 Marines are dead. You said the buck stops with you. Do you bear any responsibility for the way things have unfolded in the last two weeks,” Doocy asked Biden.

“I bear responsibility for fundamentally all that’s happened,” the Democrat career politician admitted.

“But here’s the deal: You know — I wish one day you would say these things. You know as well as I do, that the former president made a deal with the Taliban to get all American forces out of Afghanistan by May 1,” Biden said, blaming his predecessor, but who is no longer in charge of the withdrawal operation. Continued Below

“In return, the commitment was made, and that was a year before. In return, he was given a commitment to Taliban — would continue to attack others, but would not attack any Americans forces,” Biden said, confirming that service members were not killed in combat in Afghanistan under the Trump administration’s negotiations.”

“Remember that?” Biden asked, appearing to divert from Doocy’s question, but appeared emotional when the Fox News correspondent continued to press the 78-year-old.

The Democrat president standing at the podium then rested his head on his hands in silence while Doocy resumed questioning him. Video Below

Users on Twitter immediately reacted to the exchange between Biden and Doocy.

Donald Trump Jr. declared, “This is what weakness looks like.”

JOE: "I bear responsibility for all that's happened"

Joe Biden ADMITS that Trump's deal resulted in NO DEATHS of American troops for more than a year.

This is what failed and weak leadership looks like. pic.twitter.com/XKoGBuGN1I

Joe Biden saying that it was because of President Trump no Americans were attacked in the last 18 months isn't the gotcha moment he thinks it is.

Parscale Confirms Trump Rallies Will Begin In Next Two Weeks: “You’ll Again See The Kind Of Crowds & Enthusiasm That Sleepy Joe Biden Can Only Dream Of”