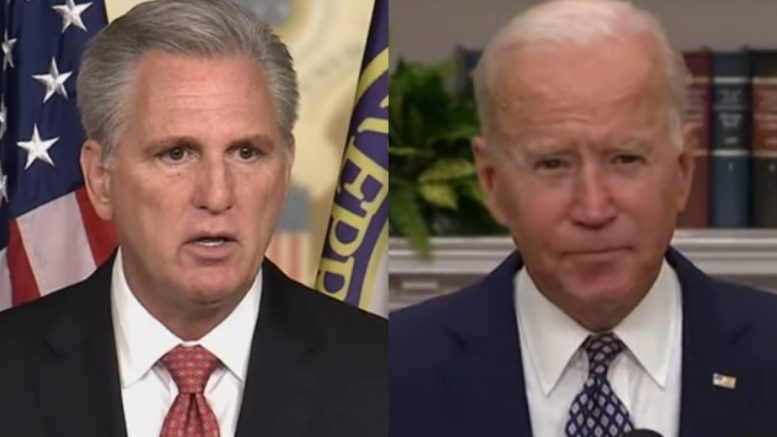 Earlier this week Biden made the decision not to extend the August 31st deadline to withdraw troops from Afghanistan, despite G-7 and GOP leaders urging him to do otherwise as thousands of Americans and Afghan allies are still trying evacuate Kabul.

As part of his remarks, Rep. McCarthy took aim at a speech Biden delivered to push a multi-trillion dollar infrastructure package while only addressing evacuation efforts for “a few minutes.” The House Minority leader suggested Biden has “turned his back” on American citizens, U.S. allies and his duties as Commander-In-Chief.

Yesterday, President Biden had an opportunity to address the public and answer questions about the ongoing crisis in Afghanistan. Instead, he made us wait a number of hours and then touted a five trillion dollar liberal wishlist that will increase greater inflation and transform our country in the worst way possible.

Then he delivered a few minutes worth of remarks on evacuation efforts, but did not say how many Americans are left stranded. The most embarrassing part though is that he refused to take questions. But he turned his back and walked away — an image that has come to define him and his presidency.

REP. KEVIN McCARTHY: "[President Joe Biden] has turned his back on his duties as a commander in chief. We have a Democrat majority that is following the same path." pic.twitter.com/tJ53wQwdWP

Related Article: Trump: “How Dare Biden Force Our Military To Run Off The Battlefield In Afghanistan & Desert What Now Have Become Many Thousands Of American Hostages”

In ending, here are some additional related remarks made by Rep. McCarthy on Wednesday while interviewing on Fox News: