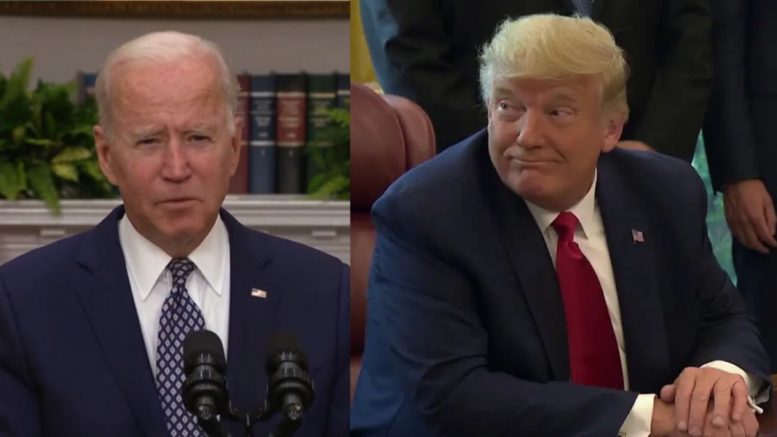 In a pair of statements issued via email on Wednesday from his “Save America” PAC, 45th President Donald J. Trump detailed how 78-year-old Joe Biden is “destroying America” and also reacted to the Supreme Court reinstating his “Remain in Mexico” policy, saying in part, “Biden was found to have broken the law in terminating the Migrant Protection Protocols, or Remain in Mexico”.

In his first statement Wednesday morning, Trump said, “Our Country has never been so diminished. It has reached an all-time low!”

In a second statement on Wednesday afternoon, President Trump said:

Biden is destroying America. His policies have created a living national nightmare: he’s surrendered our energy independence, sabotaged the economy, surged violent crime, caved to China, crushed our citizens instead of the virus, created the single greatest humiliation in our history in Afghanistan, stranded thousands of our citizens overseas at the whim of Islamic extremists, and left a wide-open border to deadly drugs, vicious crime, and unlimited illegal immigration at home!

Texas Attorney General Ken Paxton, whom I strongly endorsed for reelection, has just won a major Supreme Court victory against the Biden Open Borders agenda. I congratulate him on this win. Continued Below

Biden was found to have broken the law in terminating the Migrant Protection Protocols, or Remain in Mexico. Now, Biden must reinstate Remain in Mexico, one of my most successful and important programs in securing the border.

Other State Attorneys General should follow suit and go after every one of Biden’s unlawful border and immigration policies.

On Tuesday, the Supreme Court of the United States reinstated the Trump-era “Remain in Mexico” policy in response to a lawsuit from Texas and Missouri. The policy, implemented by former President Donald Trump, requires asylum seekers at the southern border to stay in Mexico while they await hearings in U.S. courtrooms to determine their eligibility and status. The decision was 6-3. Continued Below

BREAKING: The Supreme Court rules against the Biden administration in its attempt to end the "Remain in Mexico" program, a controversial Trump-era border policy. SCOTUS refuses to block a lower-court ruling that requires the gov't to reinstate the policy.
https://t.co/q2RFvRZ7wh pic.twitter.com/rliqBKxLDR

Missouri and Texas sued the administration, claiming that ending the policy was both illegal in the way that it was done, and that it harmed both border states and states deeper in the interior by encouraging migrants and therefore fueling the crisis at the southern border, reported Fox News.

“We are hopeful for a favorable ruling because it is clear that the Biden administration didn’t consider anything relevant to how it was working or notice and comment, and obviously we have a crisis at the border now,” Missouri AG Eric Schmitt told Fox News in an interview last month. “Anyone who is paying attention knows we have a 21-year high in border crossings, drug traffickers, and human traffickers have been emboldened, and that affects not just Texas but states like Missouri.” 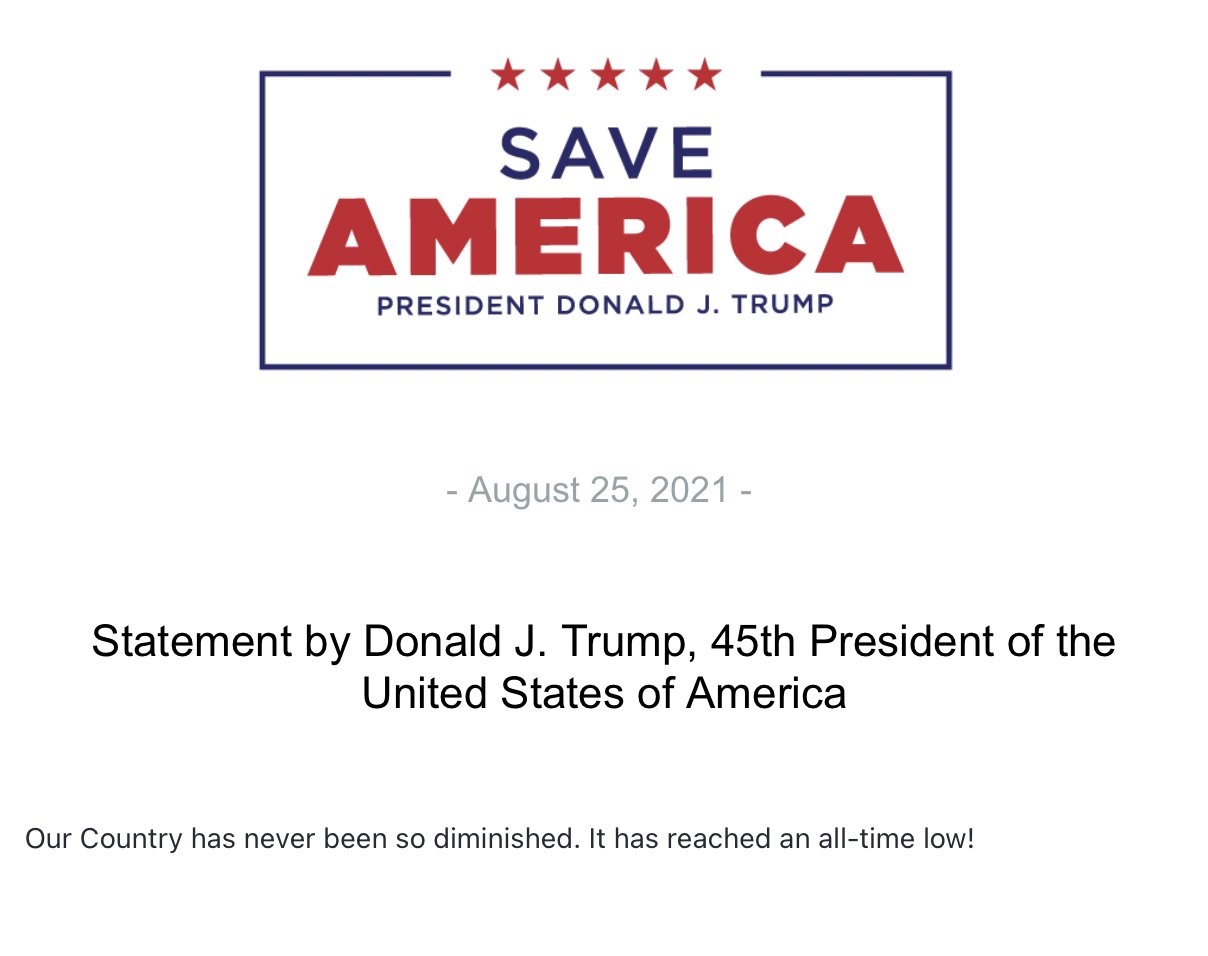 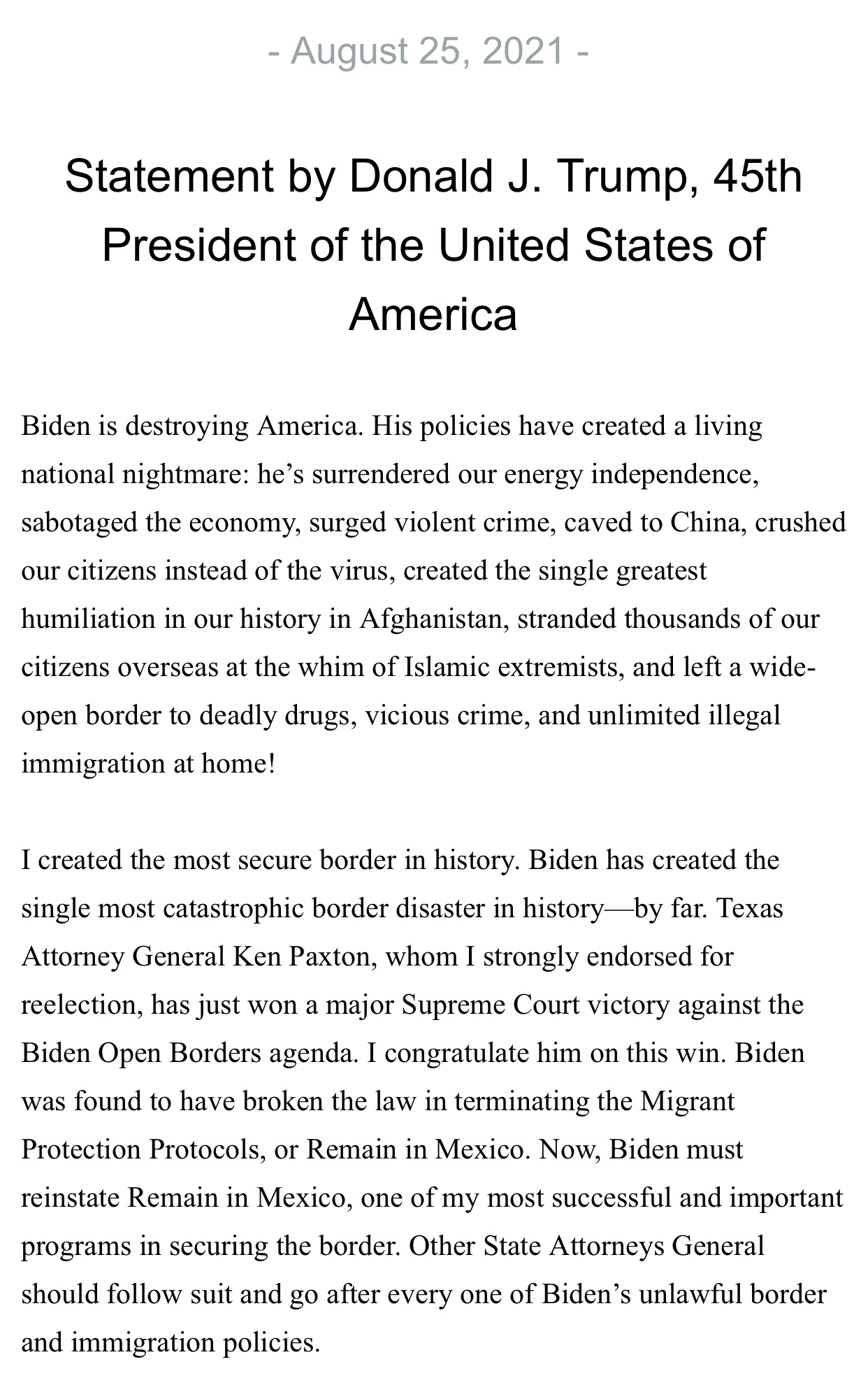 (Related: Trump On Report Of ‘20%’ Of Migrants ‘Coming Across Border’ With Covid: “This Is What A Rigged & Corrupt Presidential Election Gets You!”)