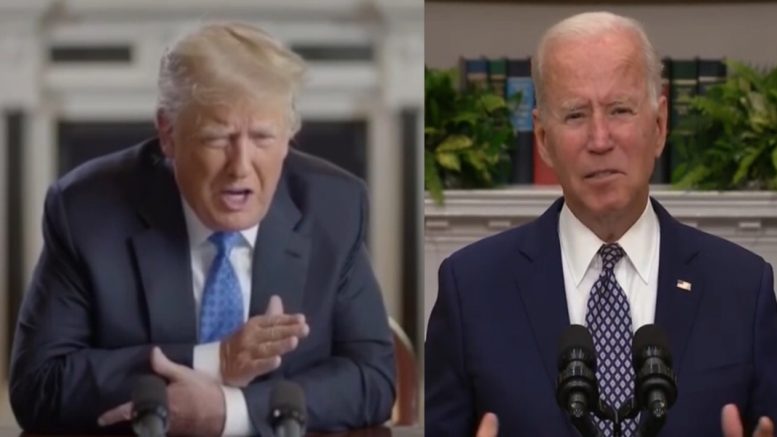 Joe Biden lied to America and to the World when he told us “America was back.” Instead, he surrendered to the Taliban, and left Americans behind to die in Afghanistan.

This will go down as one of the greatest Military failures in American history. Now, it’s the Taliban that is back – not America.

This is not the America we know and the media refuses to hold Biden accountable for the destruction and tragedy he’s caused. It’s time for the truth. Video Below

The 45th President included the following video in his statement:

In a second email statement on Tuesday afternoon, the 45th Commander in Chief said:

How dare Biden force our Military to run off the battlefield in Afghanistan and desert what now have become many thousands of American hostages.

We had Afghanistan and Kabul in perfect control with just 2,500 soldiers and he destroyed it when it was demanded that they flee!

Trump’s remarks came after Joe Biden said Tuesday that the U.S.’s planned troop withdrawal from Afghanistan on Aug. 31 was contingent on the Taliban’s continued cooperation with ongoing efforts to evacuate thousands of Americans and Afghan allies from Kabul’s airport.

“The sooner we can finish, the better,” Biden said during a short prewritten speech from the White House. “Each day of operations brings added risk to our troops.” Continued Below

“The completion by Aug. 31 depends on the Taliban continuing to cooperate and allow access to the airport to those who are transporting out and no disruptions to our operations,” Biden said. “In addition, I’ve asked the Pentagon and the State Department for contingency plans to adjust the timetable should that become necessary. I’m determined to assure that we complete our mission, this mission.”

The news comes shortly after U.S. officials told Fox News that the 6,000 troops in Kabul had already started to withdraw.

Biden decided not to extend an Aug. 31 deadline to remove all American troops from Afghanistan. Biden’s move to maintain his original deadline drew bipartisan criticism from lawmakers amid concerns that some Americans and Afghan allies could be left behind.

A Taliban spokesperson – following a meeting between leader Mullah Abdul Ghani Baradar and CIA Director William Burns in Kabul – said there will be “no extensions” to the Aug. 31 date.

The Pentagon has declined to reveal exactly how many Americans are currently trying to flee Afghanistan, saying only that “several thousand” remain. Biden said he had instructed Secretary of State Tony Blinken to provide an update on the number of Americans left in the country by Wednesday.

(Related: Trump On Afghanistan Withdrawal: “How Many Terrorists Will Joe Biden Bring To America? We Don’t Know!”)