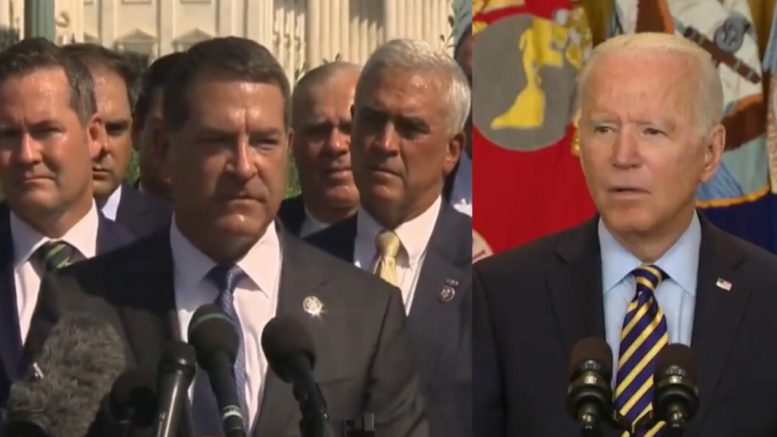 Retired U.S. Army Major Rep. Mark Green (R-TN), on Tuesday, called out Joe Biden over how he is handling the U.S. withdrawal from Afghanistan, wondering, “Who is advising this president, or is he being intentionally deceptive?”

“Afghanistan is beautiful country, if you take the Taliban out of it. The people that I worked with, when I was there, are amazing. I served in one of our nations tier 1 units doing some pretty amazing things, while I was over there. I was there when Pat Tillman was killed,” Rep. Green said, referring to the former NFL Arizona Cardinals’ safety and defensive back, who was one of most popular players, and who gave up his pro football career to enlist in the U.S. Army after the terrorist attacks of September 11.

Tillman was killed by friendly fire while serving in Afghanistan on April 22, 2004. The news that Tillman, age 27, was mistakenly gunned down by his fellow Rangers, rather than enemy forces, was initially covered up by the U.S. military, History reported.

“I’ll never forget for as long as I live, that flag draped coffin going through a cordon in some of our nations most elite warriors, and there wasn’t a dry eye. I have other friends that are not with us. I see their children in my town, because I serve the community of Ft. Campbell. I have to look them in the eye when I’m back in my district,” the Tennessee representative said.

“Let me say this to every Afghan veteran: Your service was not in vain,” he stated. “Your service was not vain. To those children, to those Gold Star children and families, your sacrifice protected America from a terrorist attack for 20 years.” Continued Below

He continued: “One of the points I want to make, I want to ask, is who’s advising this president? Because what the president is saying– we all know it’s inaccurate. He said the other day, ‘No one advised him not to pull out’. We know that’s blatantly false. [General] Mark Milley has been saying, ‘Don’t pull out, add to the force’. So who is telling this guy, ‘It’s okay to pull out.'”

“Who is advising this president, or is he being intentionally deceptive? We need to know,” the Tennessee congressman demanded.

"To every Afghan veteran, your service was not in vain… what happens from now on is on Joe Biden… I want to ask: 'who is advising this President?'" pic.twitter.com/O8I5Wa9jkx

(Related: Trump Blasts ‘Biden & Our Woke Generals’ Over Afghanistan Withdrawal: “You Don’t Do It In Reverse Order”)