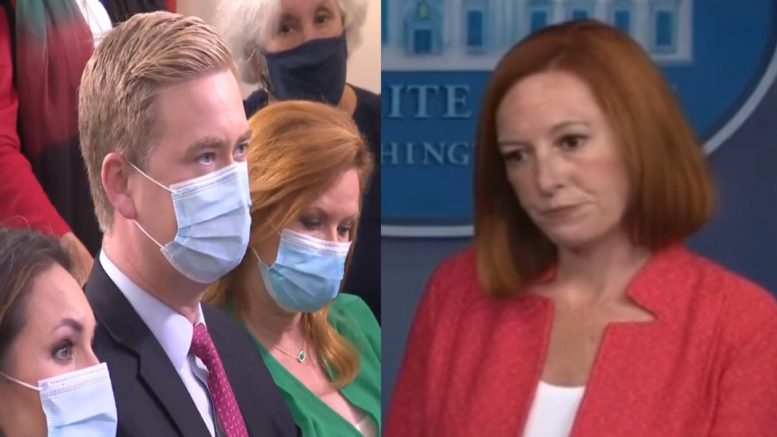 White House press secretary Jen Psaki appeared visibly irritated during a press briefing Monday when she was grilled over whether Joe Biden was aware that most of the criticism against the Afghanistan withdrawal was about Americans being “stranded” in Kabul.

Fox News’ White House correspondent Peter Doocy asked Psaki, “Does the president have a sense that most of the criticism is not of leaving Afghanistan? It’s the way that he has ordered it to happen by pulling the troops before getting these Americans who are now stranded. Does he have a sense of that?”

Doocy followed up and asked whether “there are no Americans stranded” is the official White House position.

“There are no Americas stranded is the White House official position on what is happening in Afghanistan?” Doocy wondered.

“I’m just calling you out for saying we are stranding Americans in Afghanistan when we have been very clear that we are not leaving Americans who want to return home,” Psaki alleged. “We are going to bring them home, and I think that’s important for the American public to hear and understand.” Video Below

This entire White House is living in an alternate reality. pic.twitter.com/27sEY07805

Americans are stranded in Afghanistan.

Denying this fact is ignoring reality.

The only evacuation route for Americans currently in Afghanistan is through Hamid Karzai International Airport in Kabul, and to arrive there Americans must pass through Taliban checkpoints and brave crowds of people outside the airport. On Saturday the U.S. Embassy urged Americans to avoid the airport over “potential security threats,” while a gunfight erupted on Monday morning at the airport, National Review reported.

Defense Secretary Lloyd Austin acknowledged that some Americans attempting to leave Afghanistan have been beaten by Taliban fighters, in comments to House lawmakers on Friday, as reported by Politico.

“We’re…aware that some people including Americans have been harassed and even beaten by the Taliban,” Austin said. “This is unacceptable and [we] made it clear to the designated Taliban leader.”

Lloyd’s comments came after Joe Biden had claimed that the U.S. had not received reports of American citizens being unable to enter Hamid Karzai International Airport in Kabul. Secretary Austin was present at that press conference.

“We have no indication that they haven’t been able to get in Kabul through the airport,” Biden alleged at a press conference last week. “We know of no circumstance where American citizens who are carrying an American passport are trying to get through to the airport” unsuccessfully. Continued Below

Around 37,000 people in total have been evacuated via the Kabul airport since August 14, a White House official told NBC News on Monday.

Pentagon spokesman John Kirby told reporters on Monday that “several thousand Americans” have been evacuated since the same day. Kirby, however, said that he did not want to state a specific number, claiming, “The number is very fluid, and it literally changes, nearly by the hour.”

REPORTER: "Were you being deliberately vague when you said the number of Americans [trapped in Afghanistan] was several thousand, or was it because you're not sure of the number?"@PentagonPresSec: "I think I'm just going to leave it at several thousand right now." pic.twitter.com/ehHEgmZtbf