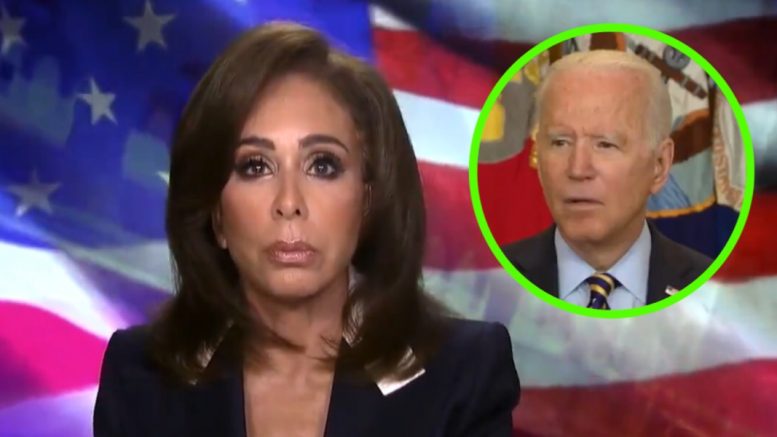 During her opening statement on “Justice” Saturday evening, Fox News’ Judge Jeanine Pirro unloaded on 78-year-old Joe Biden over his mishandling of Afghanistan, calling him an “ungrateful, tone-deaf, taxpayer-funded, career politician” and recommending that Biden “should not only be impeached as commander in chief”, but also, “court martialed”.

“Mark this day as the day the United States of America officially fell from grace as the world’s superpower due to the ineptitude, the incompetence, dereliction of duty by a so-called commander in chief. A fumbling, idiotic, confused, lying fool incapable of extricating innocent Americans and Afghan allies from behind enemy lines in the war zone we entered 20 years ago,” Pirro said.

“As American families and those trapped behind enemy lines, as Afghani-Americans whose families helped us and indeed Americans of all walks of life are glued to this crisis on television. They’re met with government officials who are not only not candid or are confused or are just outright lying,” Judge Jeanine Pirro said before playing remarks of Joe Biden who claimed, “No one is being killed right now” during an ABC News interview.

“That’s a lie. That doesn’t include people falling out of airplanes or remains being found in a wheel-well,” she said.

“Clearly the Taliban has taken over. They have our weapons and we can’t even get Americans to the airport,” Pirro vented, then played another clip of Biden’s false claims over getting Americans home safely.

“I guess I shouldn’t believe my lying eyes. … How do you expect any American in danger overseas to even believe you?” Pirro asked. “One day you tell us to proceed to the airport, but you cannot provide safe passage to that airport. The next day, Americans are told to simply proceed to the Airport anyway. Today we’re told not to go to the airport. This in spite of your promise of your promise you’ll use every source to carry out the mission.” Continued Below

“You can’t guarantee passage to an airport in a third-world-country we’ve controlled for 20 years and you give up the Bagram Air Force base, which is one of the most advanced military bases in the world? You leave us, the United States, with one airstrip?” Pirro asked.

Pirro then noted that the Taliban now have “sophisticated weaponry”, adding, “You own that, Joe! You gave it to them. You’re the one too busy or too dumb as you go back and forth on your vacations to protect Americans. Not even to mention the southern border.”

“We are now on the razors edge,” she predicted. “You leave Americans, American citizens, who put their lives on the line for America — barbarians who shoot women, who won’t cover their faces, who take young girls as brides, who have daily carnivals to watch the stoning of women and gays to death.” Continued Below

“You leave American citizens and Afghan allies who put their lives on the line for America when there was no reason. You don’t have the slightest idea what you’re doing. You are clueless. But more than that, you are dangerous,” Pirro said of Biden.

“Hey stupid! The UK Parliament condemned the United States, hold Joe Biden in contempt for the debacle in Afghanistan. The head of German chancellor, Merkle’s Party, described the withdraw as ‘The biggest NATO debacle since its founding’, while the Brits and the French stunned at the unilateral withdraw by the United States, without even an email, without even a phone call or even a return phone call to Prime Minister Boris Johnson,” she continued.

“You ungrateful, tone-deaf, taxpayer-funded, career politician!” Pirro expressed. “Mr. Cool. Do you even give a damn? Or is this all about scooping up millions like your drugged-up son from Russia, from the Ukraine and China? You are so dumb, you don’t even admit the fear, the chaos, the hysteria, the children shot and shot, beaten, whipped, and brutalized, people running from Taliban gunfire. You’re too cool to admit that,” Pirro said. Video Below

“No? Nobodies died? … Are you watching cartoons all day? You have single handedly put Americans in danger. You have singlehandedly outsourced the protection of Americans to the Taliban. And don’t act so stunned,” Pirro said.

“We were warned you were inept. We knew in our hearts who you were. You have consistently had the worst foreign policy strategy and diplomatic responses in recent history. The truth is Mr. President, you should not only be impeached as commander in chief, you should be court martialed!” Pirro declared.

"Mark this day as the day the U.S.A. officially fell from grace as the world’s super power due to the ineptitude, the incompetence and the dereliction of duty by a so-called “commander-in-chief” – Judge Jeanine’s powerful #OpeningStatement on Biden’s mishandling of Afghanistan pic.twitter.com/inyY1qhe5C

(Related: Watters Blasts Biden over the ‘Hostage Crisis’ in Afghanistan: “You Can Only Hide Incompetence for So Long’)

Doocy To Biden: ‘Why Are You Trying So Hard In Your First Year To Pull The Country So Far To The Left?’