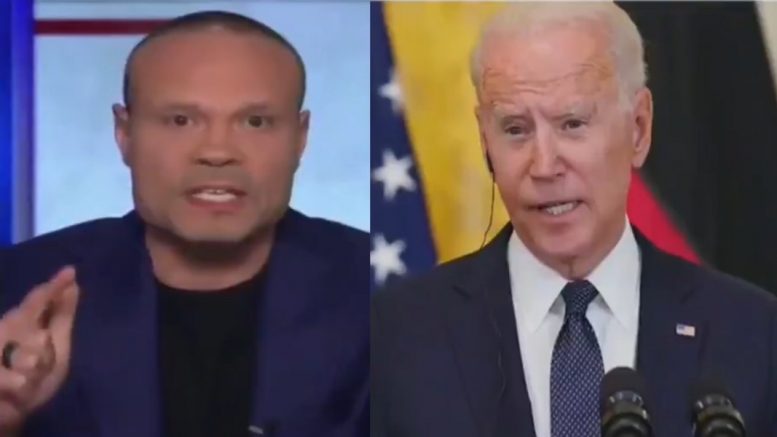 Fox News’ Dan Bongino had a strong message for Joe Biden during “Unfiltered” on Saturday evening over the Democrat career politician’s chaotic withdraw from Afghanistan.

“I have a couple messages I need to get out there that are important. Time for BS– it’s over,” Bongino said. “The first message is for Joe Biden, our president in name only.”

“You failed. You are a total, epic, colossal, apocalyptic failure,” Dan Bongino expressed.

“History will remember this as one of the most colossal, epic, political failures in America’s history. And you did this; not our military. You did this. And not only did you fail, when your failures became obvious to everyone as we watched Afghans fall off planes, trying to get out of a country taken over by mid-evil savages, you dismissed them, telling people, ‘Don’t worry. It was just a couple days ago'”, Bongino said.

He proceed to play a video clip of Joe Biden, during an ABC News interview, in which Biden was pressed over people falling off of a C-17 in Afghanistan. Biden dismissed the incident, venting, “That was 4 days ago, 5 days ago!” Continued Below

“Listen. That’s a serious message. I don’t take it lightly. If he doesn’t resign, Joe Biden should be impeached. I get what many of you are saying that we’d be handing the country to Kamala Harris. Ladies and gentlemen, it can’t get any worse,” Bongino added.

.@dbongino has a SCORCHING message for @JoeBiden amid the Afghanistan disaster:

"YOU FAILED! History will remember this…"#Unfiltered is on Fox News now pic.twitter.com/ZTuahLpc4A

Press Sec. Psaki On Biden Appearing Maskless After Signing Mask Mandate: “We Have Bigger Issues To Worry About”